Warning About Trying to Exchange Argentine Pesos to US Dollars 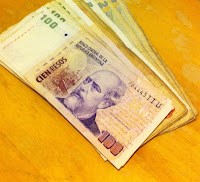 Read carefully if you, or someone you know is planning on traveling to Argentina in the near future, because we just lost an equivalent of ~USD$200 dollars.  How?

When we were leaving Buenos Aires, we still had about AR$1200 pesos leftover; however, due to recent Argentine monetary policies (more on that in a moment), no legitimate currency exchange house will trade AR$ pesos into US dollars or Euros or any other currency for that matter.  Basically, we are sitting on a pile of cash that is only good in Argentina.  Unless we go back to Argentina, we might as well use it as toilet tissue because it's just paper to the rest of the world.


After visiting several currency exchanges at Ezeiza airport yesterday, the only way they would trade the pesos into US dollars or Euros is if we had the transaction receipt for when we traded our USD/Euros into Argentine pesos, to prove that we were originally in possession of that particular currency.  Well, that posed a problem for a couple of reasons: (1) Who actually keeps the receipt from a currency exchange encounter?  Never.  We've never even heard that this was important.  Had we known, it would've been the most precious piece of paperwork next to our passport.  (2) Let's say we did keep our original receipt from 3-weeks ago...it still wouldn't have helped our situation because we traded Peruvian Nuevo Soles into AR$, which shows no evidence that we were ever in possession of USD or Euros.  We didn't need any Soles in return...we needed Euros because we were headed to Madrid.

We were hopeful that once we arrived in Madrid, things would be different, but no.  The American Express exchange booth we went to in Madrid was also not accepting AR$ pesos.   In the past, we've been able to trade undesirable currency - albeit a completely unfavorable rate - where we were just glad to get rid of it, but for them to flat-out deny a trade seems highly unprecedented.  Later, a little Internet research revealed that all US-based exchange houses have stopped trading in Argentine pesos since 2008!  No wonder...

So, why is this happening?  There's a lot of tumultuous history here, such as the 2001-2002 financial crisis that is burned into the psyche of the Argentines when their currency collapsed and they lost their savings overnight.  Nowadays, the government wants to hold onto the USD that it does have, to service its national debt.  Argentine residents also prefer USD for savings because it is more stable.  Argentines also make real estate transactions in USD.  However, this outflow of USD is not ideal for the government.  Since the government can make the laws, they recently decided to restrict the trade of pesos into USD.  In addition, according to an article from June 12, 2012 by the Christian Science Monitor, "At the end of May, the tax office (AFIP) introduced a series of hoops that residents will have to jump through in order to travel abroad with foreign currency, in an attempt to keep dollars in the country. Argentines are finding that everyday requests to change pesos into dollars, which AFIP also needs to approve, are also being refused. This follows controls in April that stopped peso account holders from withdrawing money from their Argentine bank accounts using debit cards overseas."  Yup, just like that.  The only entity 'winning' in this lose-lose game are the black market traders.

The first time we were alerted to any currency problem was when we went to the Thai Embassy in Buenos Aires to obtain a tourist visa and they wanted to be paid in USD, of which we did not have.  It was virtually impossible to get our AR$ pesos traded into USD to finalize this transaction.

Had we known about this issue being discussed back in April 2012 on Lonely Planet's Thorn Tree Travel Forum, we could've saved ourselves a headache.  One of the contributor's (mendocinateacher) comment makes sense to us now and wished we'd known: "No, you cannot exchange your excess pesos for dollars, nor for any other currency at Ezeiza.  You cannot buy any foreign currency in Argentina unless you have special permission to buy from the AFIP agency, which is practically impossible. Your only option is to buy illegally on the black market...or exchange out of country (very poor rates, and in some places impossible to sell Argentine pesos.  The best rate is in Chile or Uruguay but you have to pay double exchange..."  What we should've done is what another Thorn Tree contributor wrote: "We exchanged our Argentine pesos at Ezeiza - not for USD but for wine.  Spent every centavo we had!"  Genius idea, except when you're traveling around the world with just a backpack, not sure how we would've carried all that excess wine.  I guess this just means we'll have to go back to Argentina soon and spend our pesos on more steaks!

As long as the currency issue persists, be prepared when traveling to Argentina by: (1) keeping your original exchange receipt!  (2) spend wisely so as to not have any pesos leftover when you depart. (3) Most airport vendors take USD and Euros so don't exchange all your money when you first arrive.  Save some for incidentals at the airport when you depart.  (4) Although a primarily cash-based society, most touristed businesses take Visa and MasterCard.

Our "lessons learned" category continues to grow!  We hope you learned something because we certainly had an expensive lesson.

Links to Other Articles:
Reuters, "Argentina Loses a Third of Its Dollar Deposits", June 8, 2012