An excerpt from a short conversation with my co-worker and friend after she found out she lost her entire work calendar/appointments after a failed attempt at syncing information with a new computer.

Friend: "Did we have xyz meeting today? I have no idea where I'm suppose to be."
Me: "No, that's next week."
Friend: "Oh, thank goodness. I feel like I missed something else today."
Me: "Now you'll live in paranoia from not really knowing if your calendar is accurate or not."
Friend: "Yup, but I can now recreate my life. Ha."
Me: "Good point. I think I'll try re-syncing so I can start over."
Friend: "You are! Starting in May!"
Me: "True. CTRL-ALT-DEL to life." 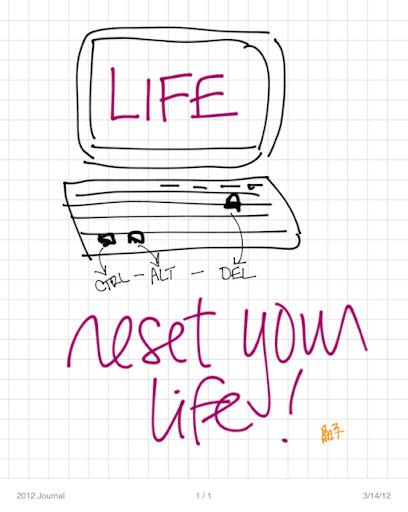 What We Learned at the Inaugural Meet, Plan, Go! Kansas City Get-Together

As Mike already posted on our Facebook page, we enjoyed attending the inaugural Meet, Plan, Go! get-together in Kansas City this past Monday night, hosted by Kristi Miller. Thanks, Kristi, for organizing!!

I think most of us can figure out the general theme of a get-together by the looks of the guests at the table, but I doubt anyone would've been able to guess our commonality - a seemingly random assortment of 9 individuals who got together for the sole purpose sharing our interest in extended-travel.

Here's a few things we learned from this meeting.

EXTENDED TRAVEL IS A LIFESTYLE
It seems that once the travel bug strikes, it's hard to get rid of it. In fact, working becomes only a means to surviving and saving $$ until the next extended travel opportunity. Therefore, a more flexible, self-employed, or contract type of work becomes the preferred choice. A minimalist, temporary lifestyle becomes acceptable, only amassing enough belongings to get you by but never enough to make one feel too settled down and permanent. Lest anyone worry about our sanity, remember that we have a house, a dog, and a great job to come back to (hopefully), so don't expect to have such an extreme reaction. However, don't think for a moment that this will only be a "once-in-a-lifetime" chance for us. :)

WE'RE NOT THAT CRAZY
We already suspected this, but was confirmed by Kristi and others that the majority of career breakers or extended travelers are Europeans, Australians, etc. In fact, one of the reasons for seeking out other career breakers through Meet, Plan, Go! was to meet anyone...just anyone, who had actually done this kind of thing before. Except for 1 person, we have never met anyone else who would consider doing such a thing. Americans rarely take an extended vacation, let alone a career break. It was a nice change to be among others who shared the same interest - confirming that we aren't as different or crazy as we may think.

EVERYONE WAS INSPIRED BY SOMEONE
Interestingly, most everyone was able to share a precise moment or person that inspired them to pursue extended travels. Whether it be a sister, or a friend, or a movie, we can all recall the specifics of when this world of travel became a possibility for us. For Mike, it was his friend Ray who went to Europe and traveled, sailing a boat to the Caribbean, and traveling from coast to coast in the US. All along the way, Ray sent postcards to Mike - the best geography lesson in the world - inspiring a small town Alabama boy to one day experience the same things. For me, my fearless parents made our transient life seem very normal as they dragged my brother and I around with them from Japan, to California, all over the US, to Singapore, and back to Japan. I thought everyone moved a least 10 times. By the time I became a young adult, moving alone to the East Coast, to Northern California, to Kansas, etc. was no big deal. Our hope is that through OUR travels, we can inspire a child or a friend to experience the world one day.

VPN for Secure iPhone and iPad

For some reason I've never been a fan of setting up automatic bill payments from our checking account. We currently receive all of our bills, except 2, via email and pay them all online with our bank and PayPal apps on the iPhone and iPad. This should make paying bills fairly easy while traveling, as long as we have wifi. From doing a little research, it appears that most hostels and apartments-for-rent have wifi and various other locations. The issue is, public wifi can leave your financial info more vulnerable to online theft of information.

I was looking for a way to help secure that important information while using public wifi. VPN Fire is a product that has gotten a lot of good reviews. The Virtual Private Network (VPN) gives you a new ip address and provides secure encrypted communication to their servers. The app is very easy to download, set-up is easy, and easy to turn on or off when not needed. You pay by buying various subscription packages. It seems fairly inexpensive for the amount of data we plan to use. Also, since the ip address assigned makes you anonymous, you can access sites blocked by the network you are on or the country you are in. This makes it popular for school kids who want to go to sites that the school's network blocks and for people in countries that block certain sites (eg. China). Although most financial and email sites offer varying degrees of security on their own, if you ever check your back account or pay bills at Starbucks, you may want to check out VPN Fire. - M

Itinerary Change, But No Big Deal

I recently received an email from our RTW (round the world) flight broker at AirTreks, informing us that 2 of our booked flights had been canceled by the airlines. The email gave us various options and requested we call them to discuss the details and make other arrangements. I did and we ended up better off than we originally were.

The Caracas to Quito leg of the Atlanta-Miami-Caracas-Quito flight was canceled for the day we had booked but we could book for the next day. This option would have required us to layover one night in Caracas, Venezuela or Miami, Florida. Since we have no real desire to see Hugo Chavez in Caracas (ha, ha), we opted to spend the night in Miami instead, saving us a trip through Caracas's customs and immigration. I immediately got on Hotwire and booked a great hotel at Miami Beach for $131. The AirTreks representative informed us that our travel insurance would pay up to $150 night for the hotel. How sweet is a free night at Miami Beach? FYI, there is an express bus from the airport to Miami/South Beach. Route 150 and it cost $2.35.

Our other flight cancelation was the leg from Istanbul to Tel Aviv, Israel. We were able to change airlines at no extra costs and actually shaved a good bit of flying time. Our original flight went through Riga, Latvia (google the location and you'll see how out of the way that was!). Now we are routed through Athens, Greece. So if there is no big strike in Greece and no bombs falling on Israel the week we are there (kidding, mom), we are set. I've got to say that AirTreks has some great customer service and they have handled all of this very nicely.

Recently, a friend of ours just came back from an overseas trip where he found himself unable to use the debit card he had taken, and for some strange reason, unable to obtain a cash advance on his credit card at this particular bank he was at. He ended up asking a friend to wire him some money from the States. The friend, rightfully suspicious, made him call to verify that this wasn't some e-mail scam.

Indeed, knowing that your bank cards will work in a foreign country is very reassuring. We cannot assume that whatever works in the States will be the same elsewhere. As a result, we've already acquired a chip-and-PIN card and we discussed the purpose of that in an earlier post that can be accessed here.

Here are some things to consider about using debit and credit cards.

It's best to call your banks and ask about the conditions stated above. The final tip is, have the bank contact and account information written down somewhere, in case your cards get stolen. Also, don't carry all your cards in one place. If traveling with someone else, divide the cards up so even if my stuff gets stolen, we still have another card that we can use.