Week 9: Cuzco, the Imperial City of the Inca Empire 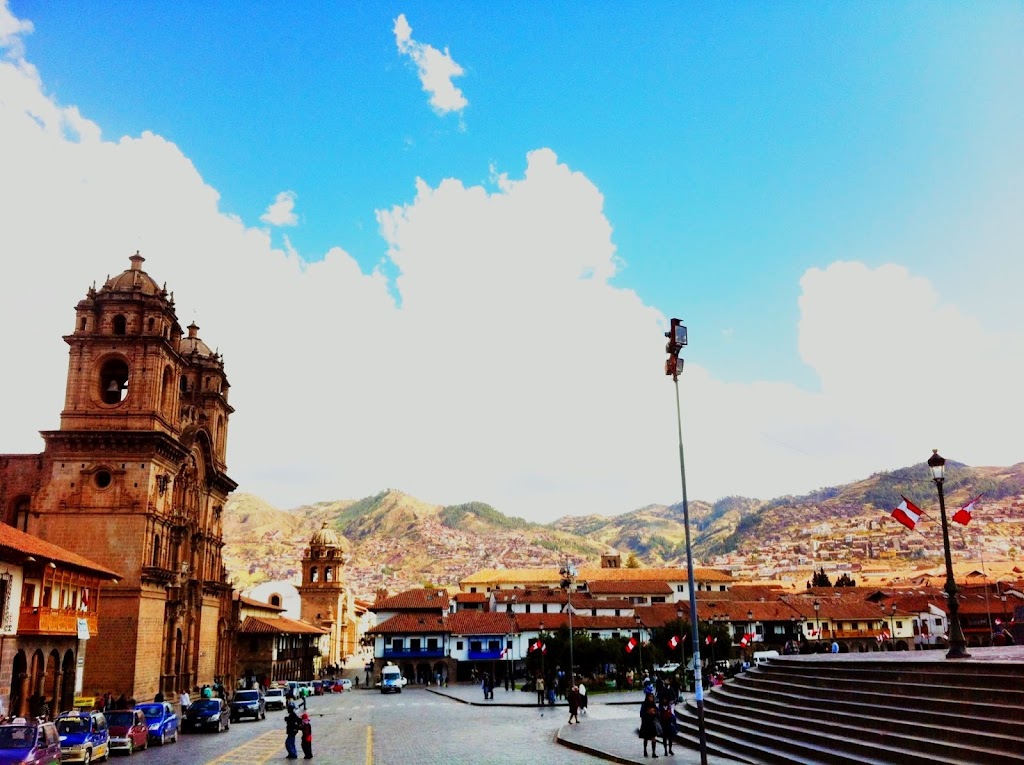 Cuzco (or sometimes spelled Cusco), meaning "navel of the world", is a famous city over 11,000 feet high in the Peruvian Andes.  It is famous for several reasons:

1.  Gateway to Machu Picchu, the world's number one archeological site and Peru's number one tourist destination
2.  Home to Sacsayhuaman, greatest Incan ruin outside of Machu Picchu, believed to be a royal retreat or fortress.
3.  Capital of the Incan Empire in the 15th century
4.  Oldest continuously inhabited city in the Americas 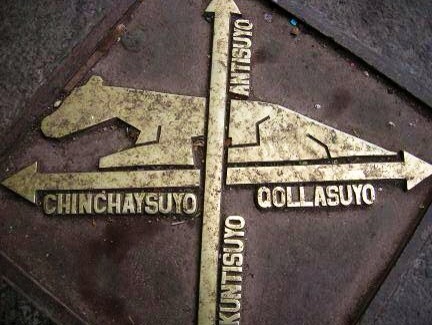 Okay, but why in THIS remote part of the Andes?  Legend says that in the 12th century, the first Inca, Manco Capac, was charged by the sun god to find the navel of the earth - a spot where he could plunge a golden rod into the ground until it disappeared.  This spot was Cuzco, and therefore, it became the Incan Empire's (Tawantinsuyu, "four parts together") capital or imperial city.  The huge Empire was divided into 4 parts:  Chinchaysuyo, Antisuyo, Cuntisuyo, and Collasuyo regions, and Cuzco was the central point from where each region extended out.

Cuzco is built in the shape of a puma - a sacred animal to the Incans.  The head of the puma is represented by the fortress, Sacsayhuaman, the heart of the puma is the main Plaza Huacaypata (now called Plaza de Armas), and the converging rivers - Huatanay and Tullumayo - represents the tail.

When the Spaniards conquered the Incans in the 1533, they built a colonial city atop the foundations of the Incan empire because it was so well-built and earthquake-proof.  Cuzco colonial buildings are very well-preserved and ubiquitous.  There isn't "a section or place" in Cuzco to go check it out.  The entire colonial city seems like we are on a movie set.  It is one of the most charming places we've ever experienced. 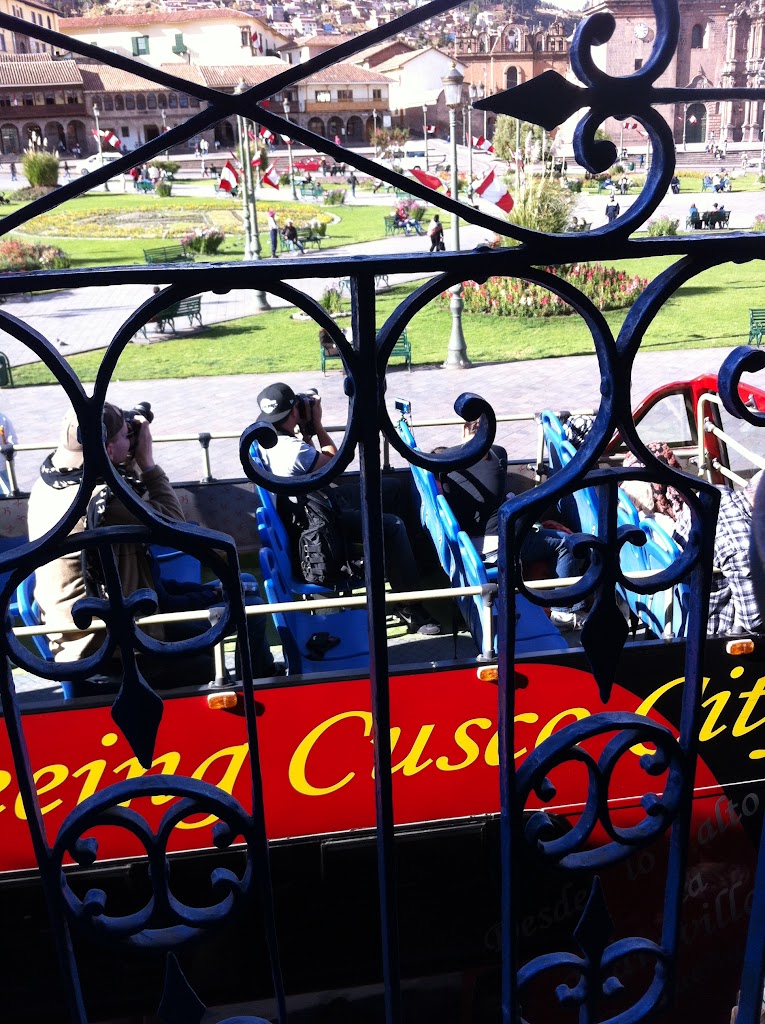 Therefore, it is one of the most touristed places.  For a tourist, it is a comfortable place because the city truly accommodates to the travelers' needs with great accommodations, food, English speaking personnel, etc.  However, because it is such a touristed place, we are constantly harassed by street vendors, not to mention the aggressive cab drivers and sales people at the airport that prey on the naïve tourists.

After experiencing 5-weeks in South America, we are getting better at driving a hard bargain with these vendors offering transportation and lodging.  Guidebooks and the hostels will publish the standard taxi rate, so we know if we are getting screwed.  At the Cuzco airport, literally, 10-15 cab drivers surrounded us, trying to take us to our hostel.  All of them started at 30 Soles, which we balked at.  They quickly took it down to 20 Soles - still too high.  So, we started walking away, but they surround you without any regard for personal space, so it can be overwhelming.  We were throwing out "Quince" (15 Soles), and finally a cab driver took us up on our offer and all was well.  We know it's only a $5 difference between 30 Soles and 15 Soles, but every penny counts and it's the principal of it - we're not the naïve gringos they can take advantage of.  Speaking a little Spanish when negotiating also helps.

Anyway, here are some photos from our short week in Cuzco.  Enjoy!

Our first stop was Paddy's, claiming to be the highest Irish bar on earth at 11156 feet! Besides beers, the menu looked really good so we split a Shepherd's Pie - flavors we haven't been able to access in almost 2 months. The views of Plaza de Armas was an added bonus. 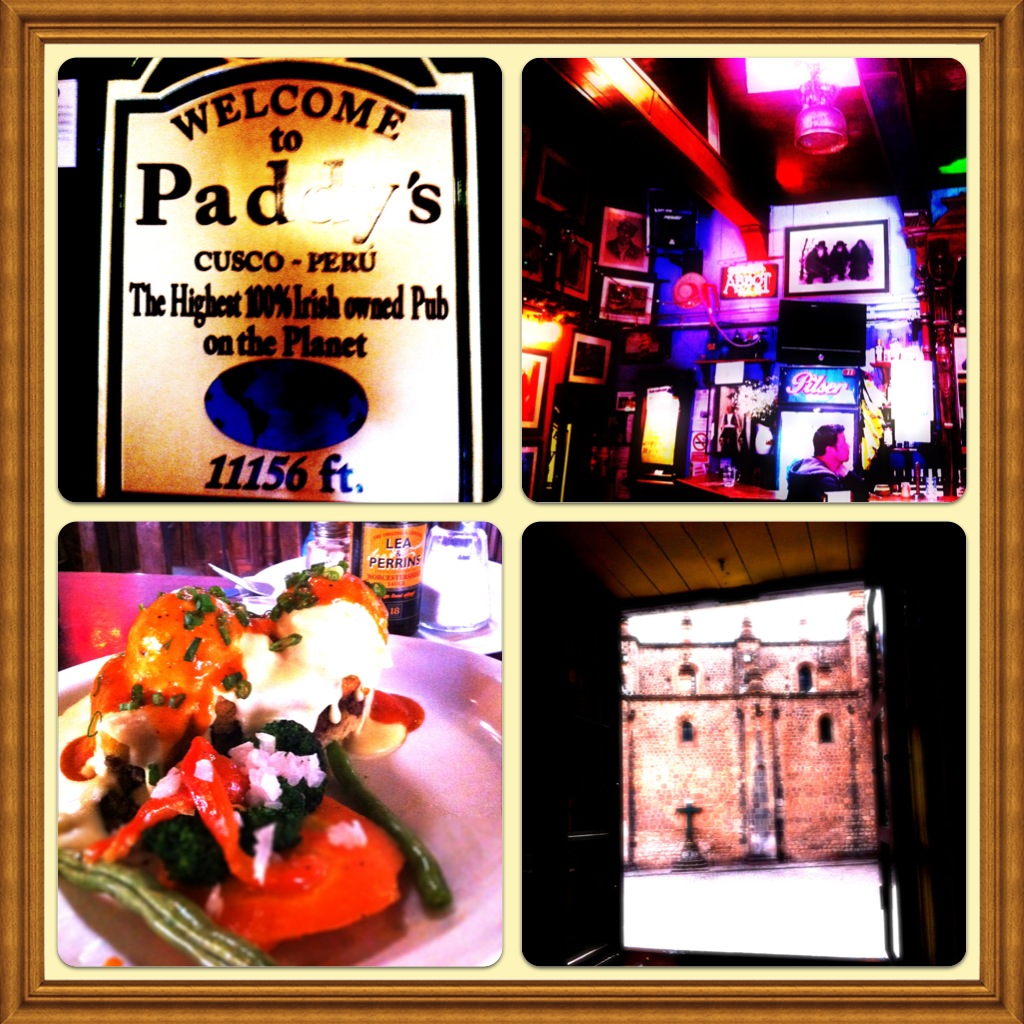 Plaza de Armas (or used to be called Plaza Huacaypata) has been the center of town since Inca times. It is flanked by the main cathedral and La Compañia de Jesus church. 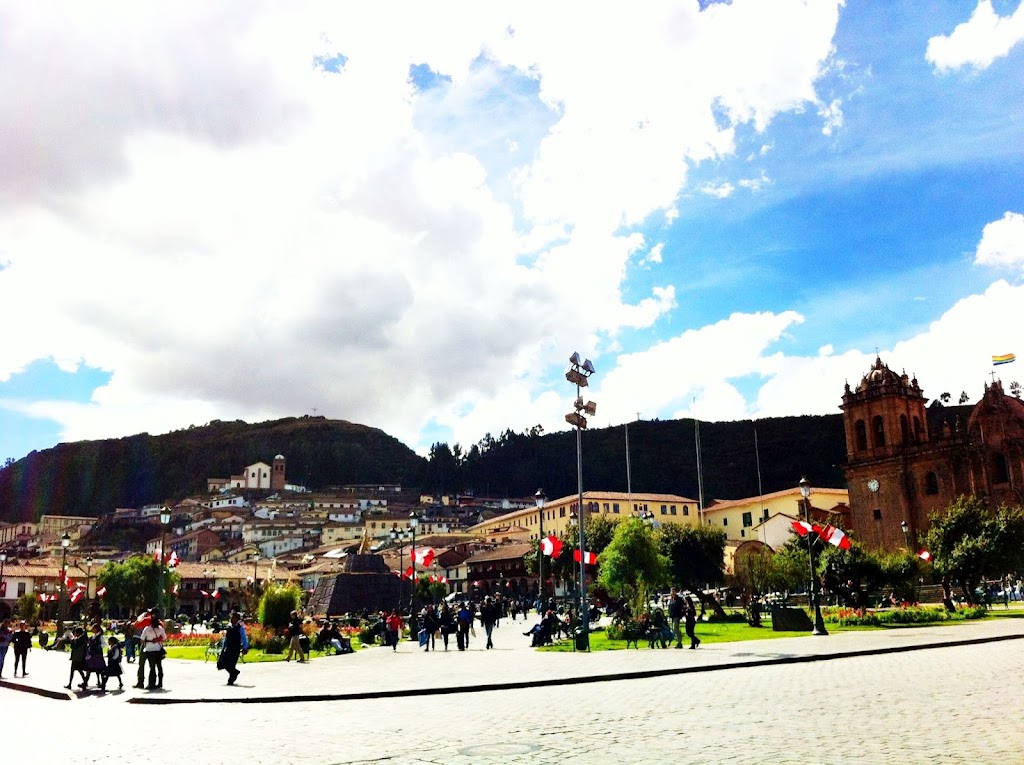 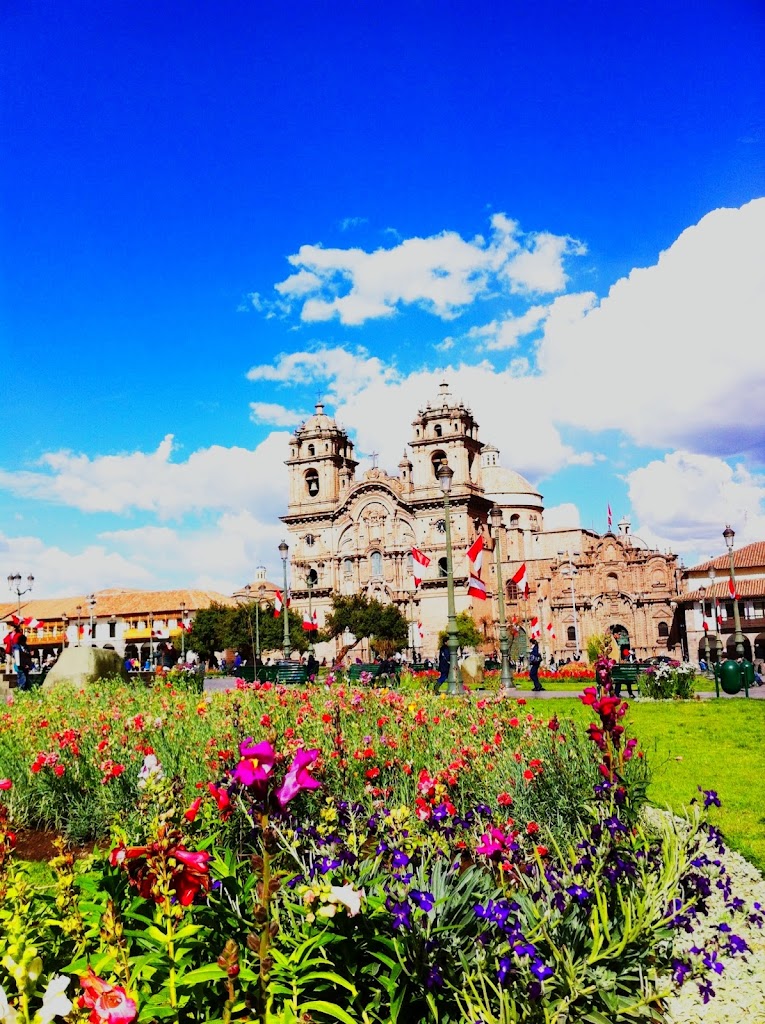 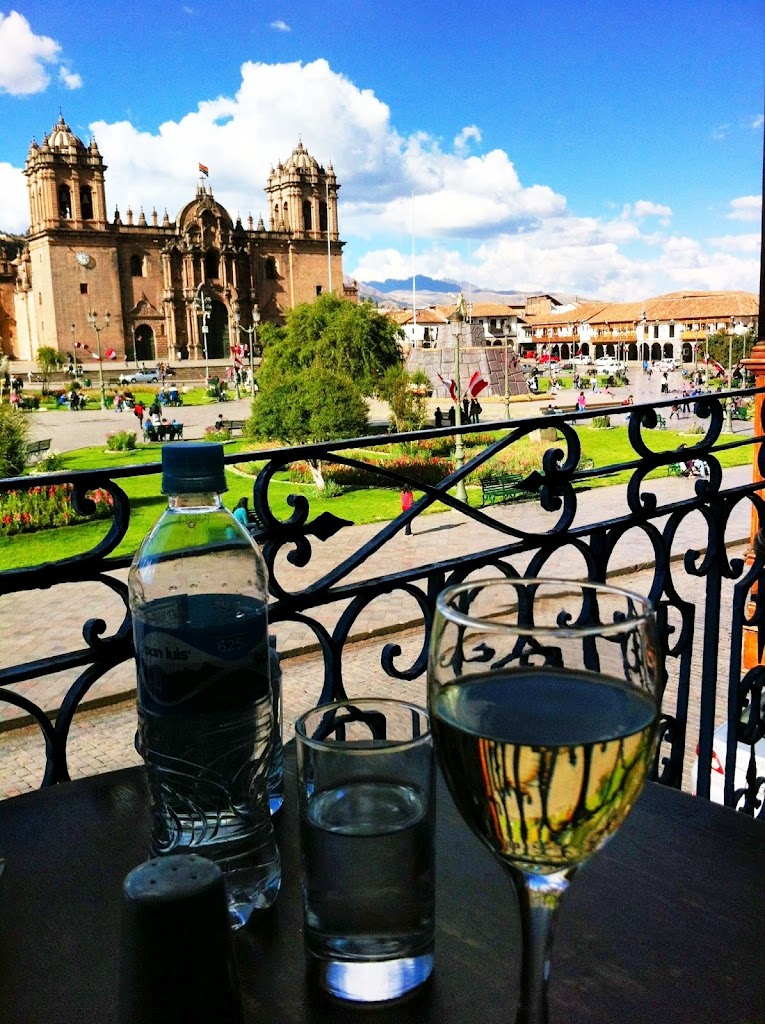 Even after a short walk, the camera was 'blowing up' with photos of sooooo many beautiful buildings, alleys, walkways, streets! Here's just a few. 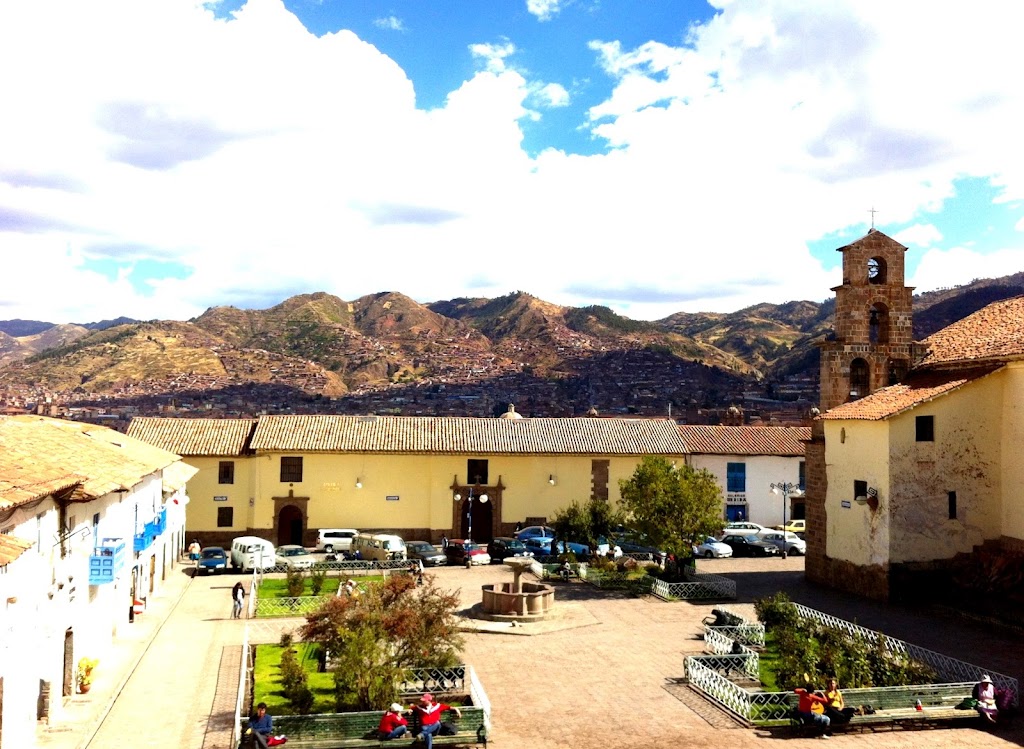 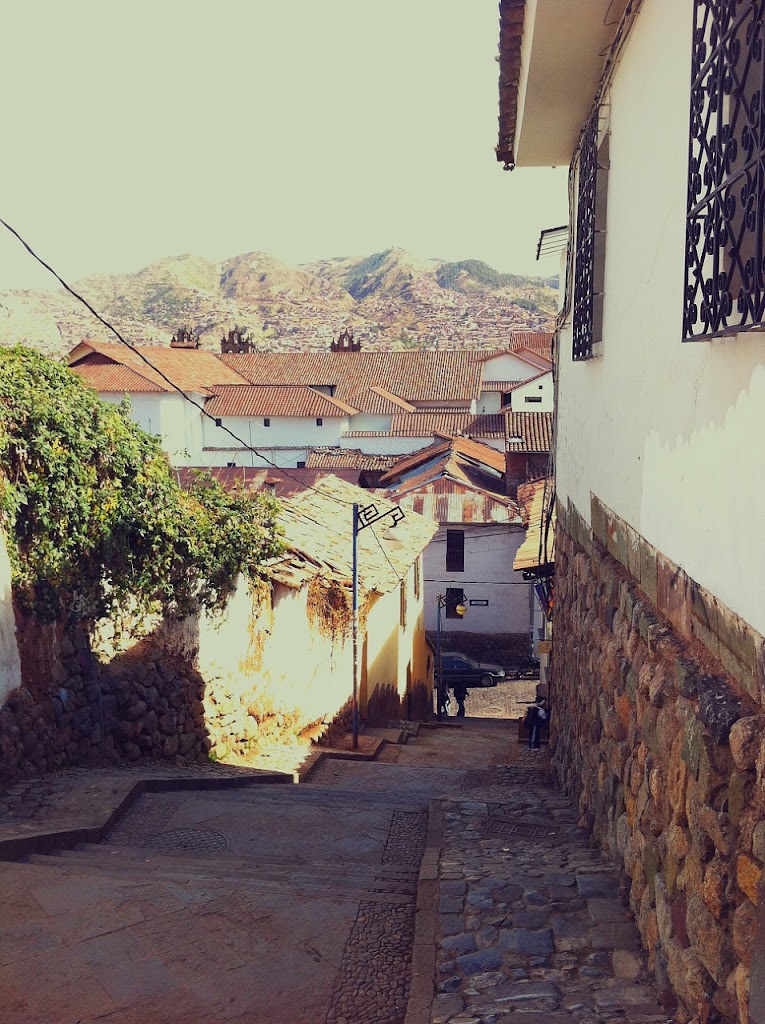 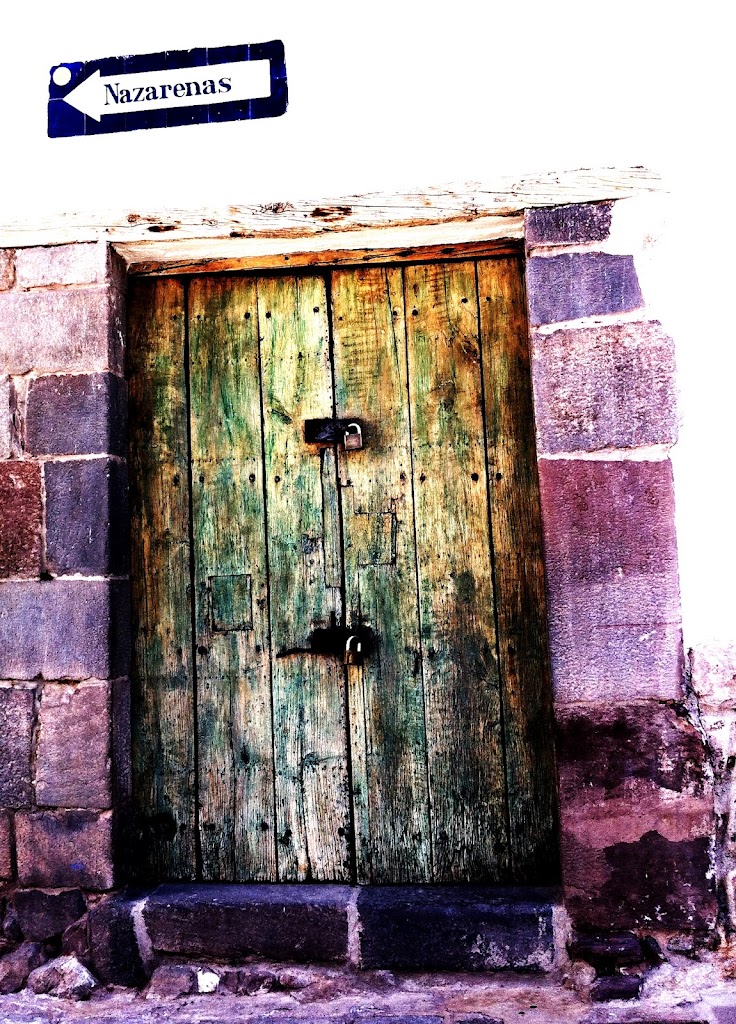 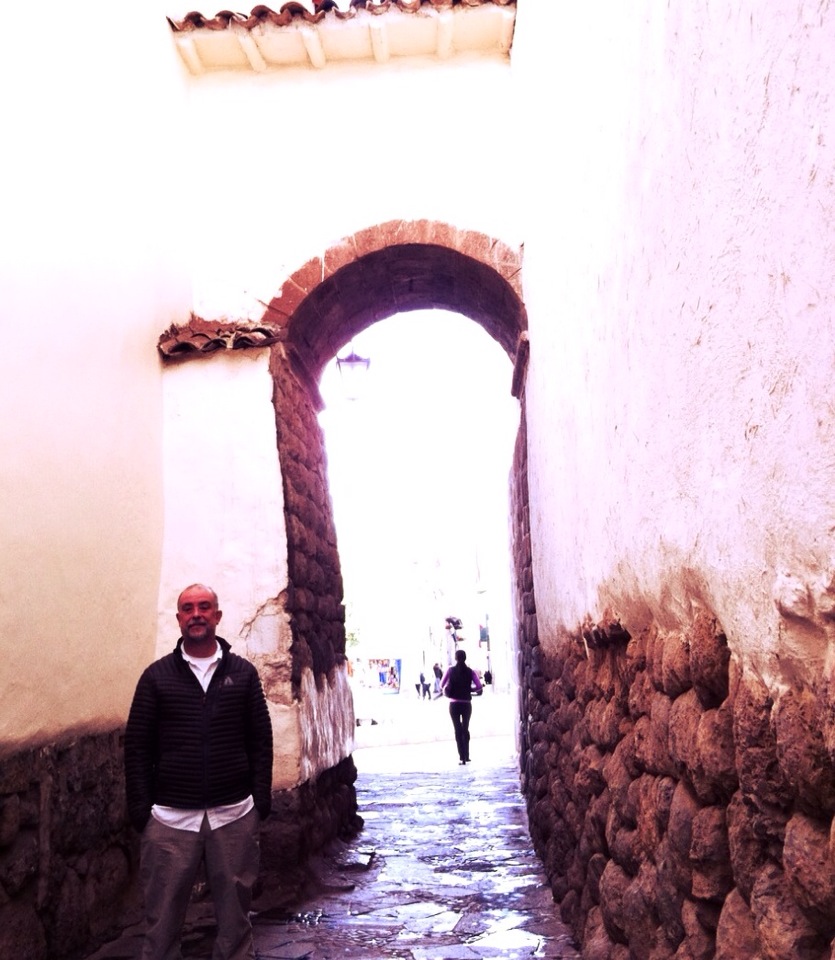 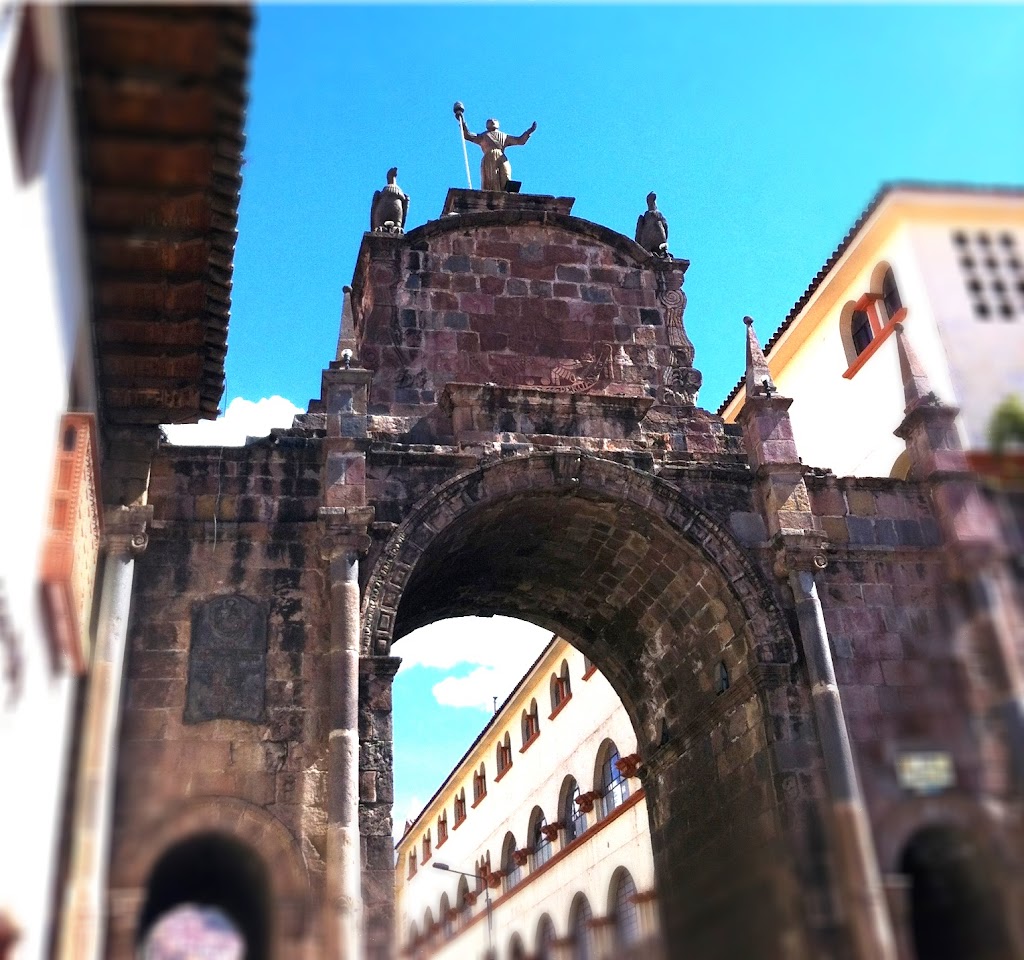 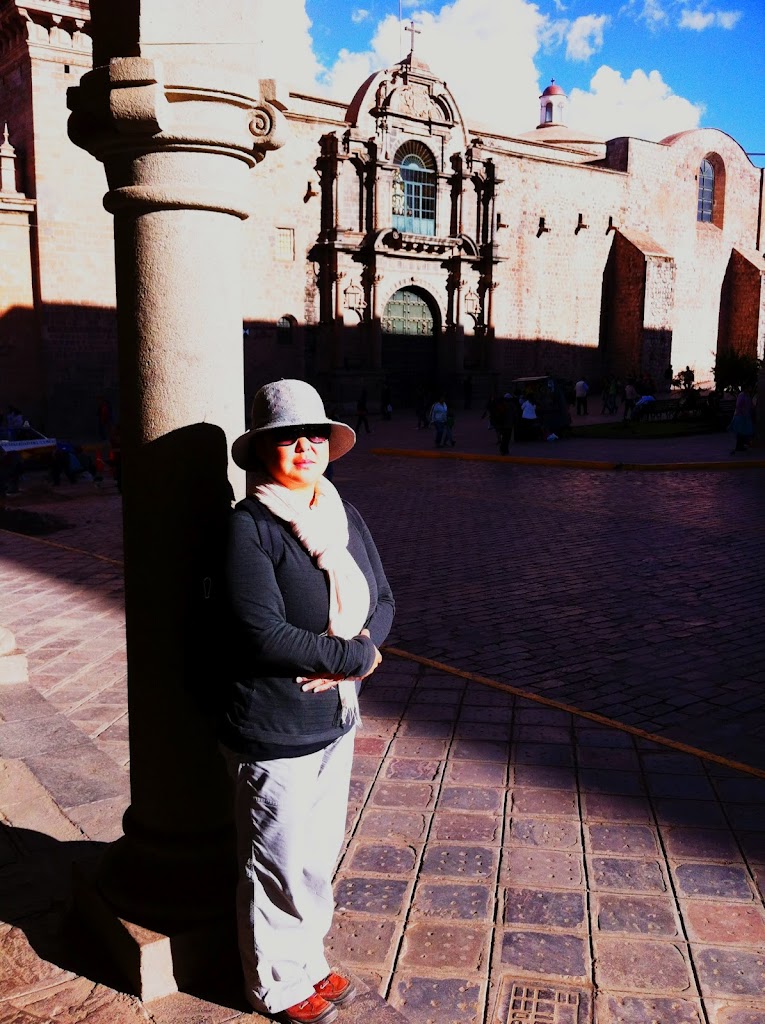 In the following photo, on the right is Inca stone foundation wall famously called the 12-sided stone where the stones fit so perfectly that there is no space for even a piece of paper; juxtaposed by the "regular" Spanish built wall on the left. 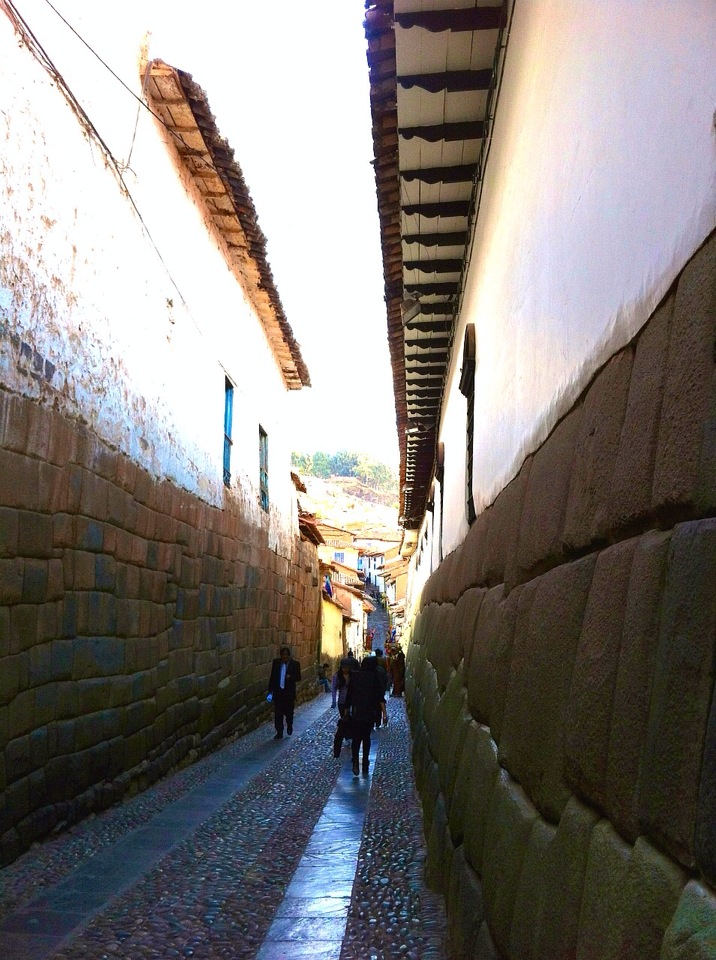 Around San Pedro is a huge outdoor and covered market. 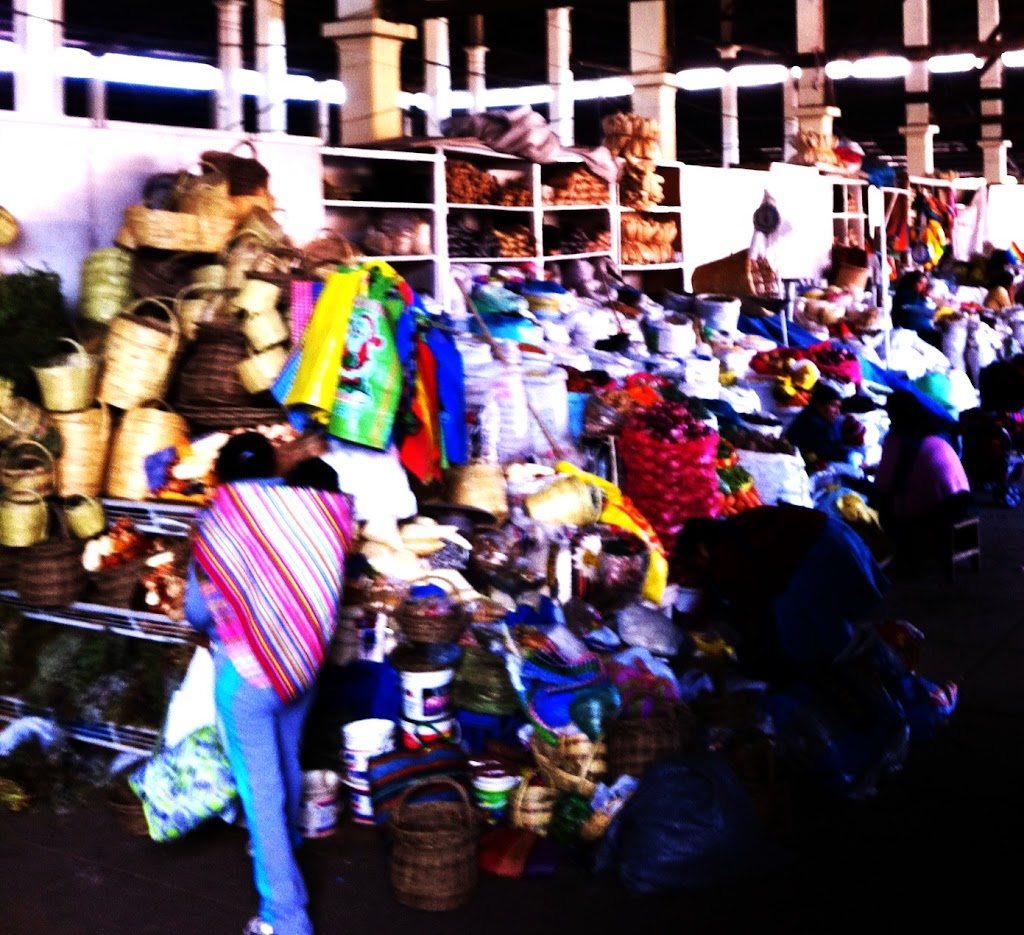 [Vendors selling dry goods such as beans and baskets.] 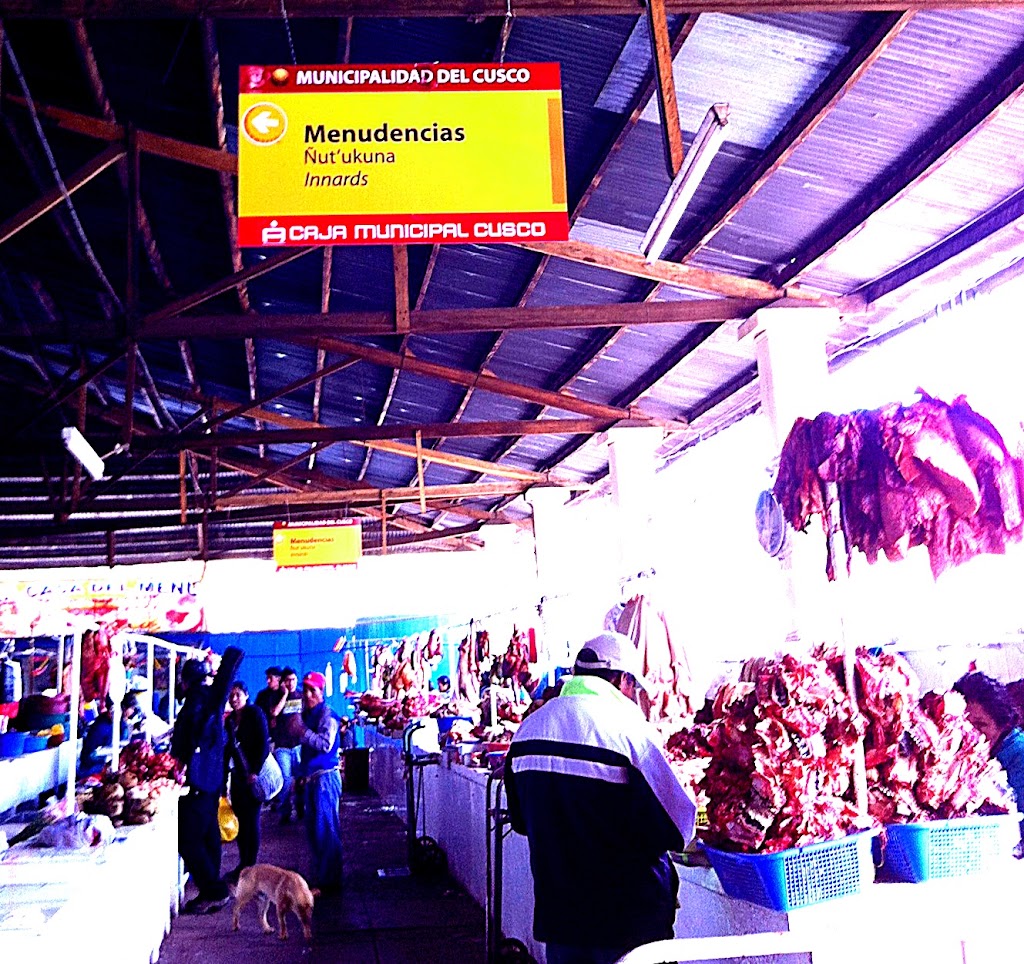 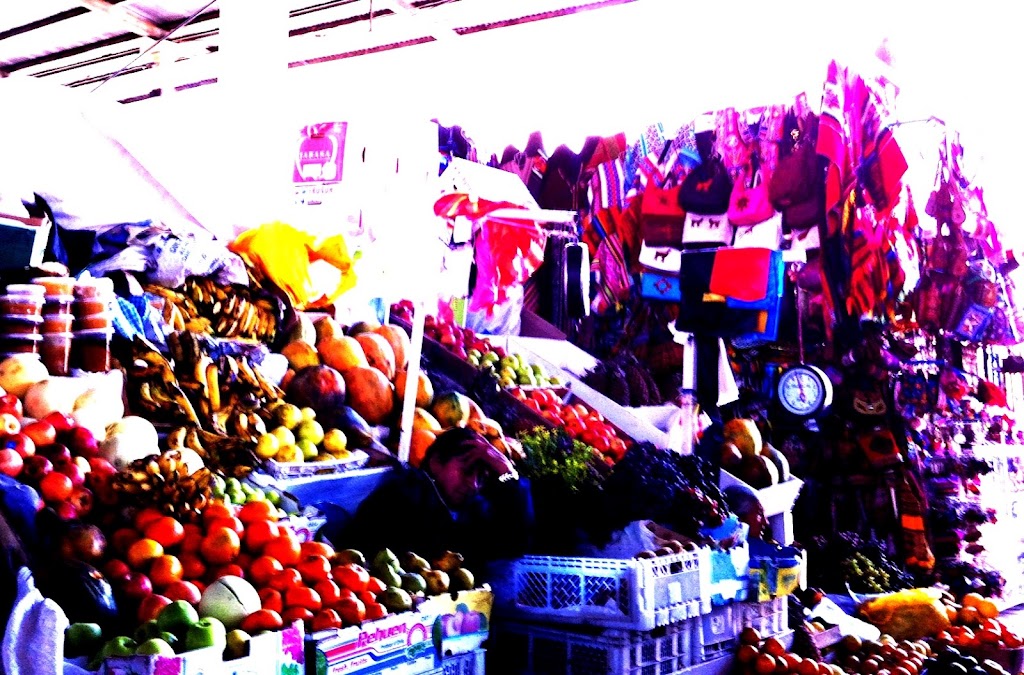 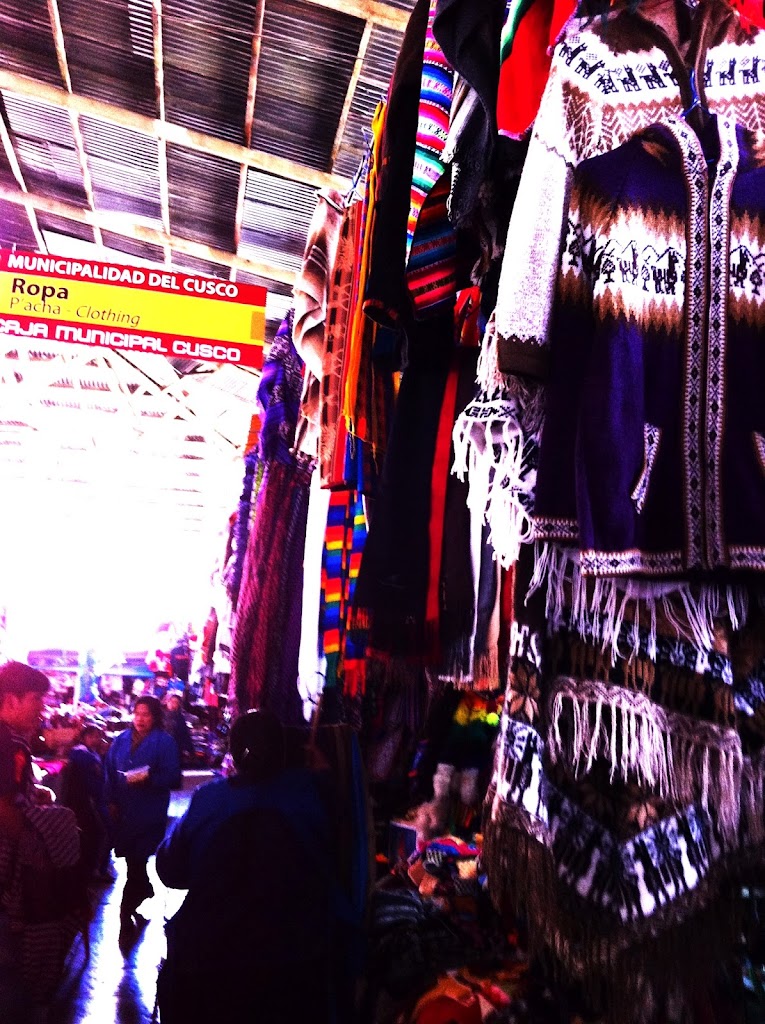 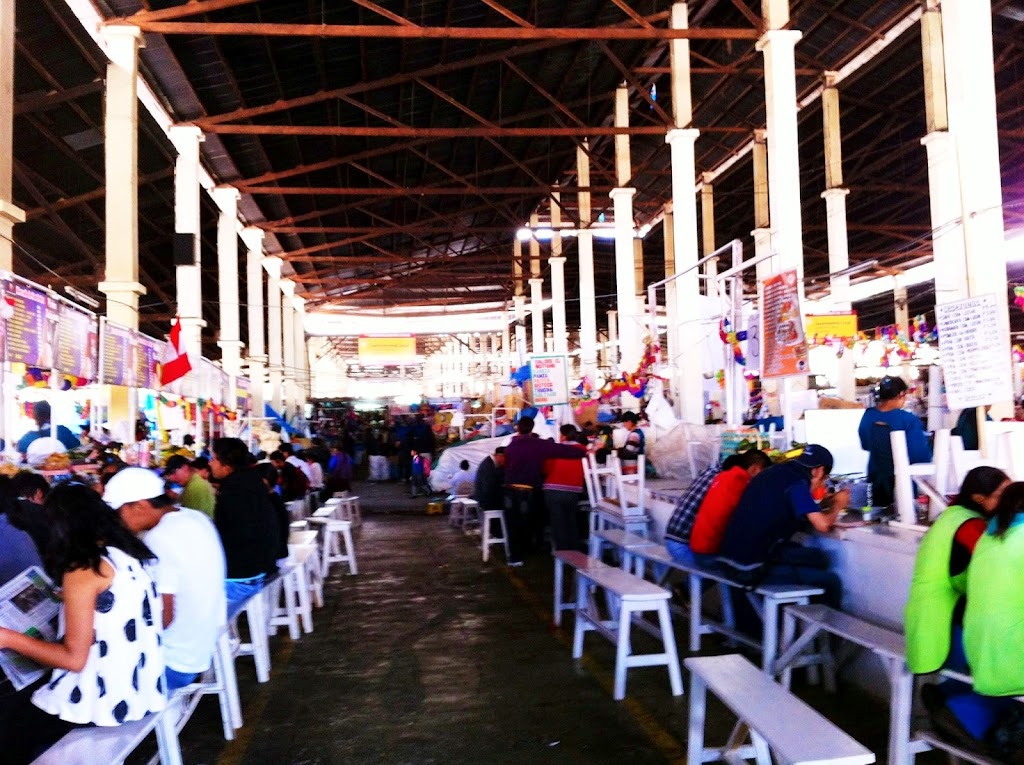 Incans worshipped the god of sun, or Inti. Q'orikancha or "Golden Temple" is the most important temple in Inca Empire, dedicated to Inti and can be located off of Avenida El Sol. There is also a nice Incan mural and a monument of Inti. 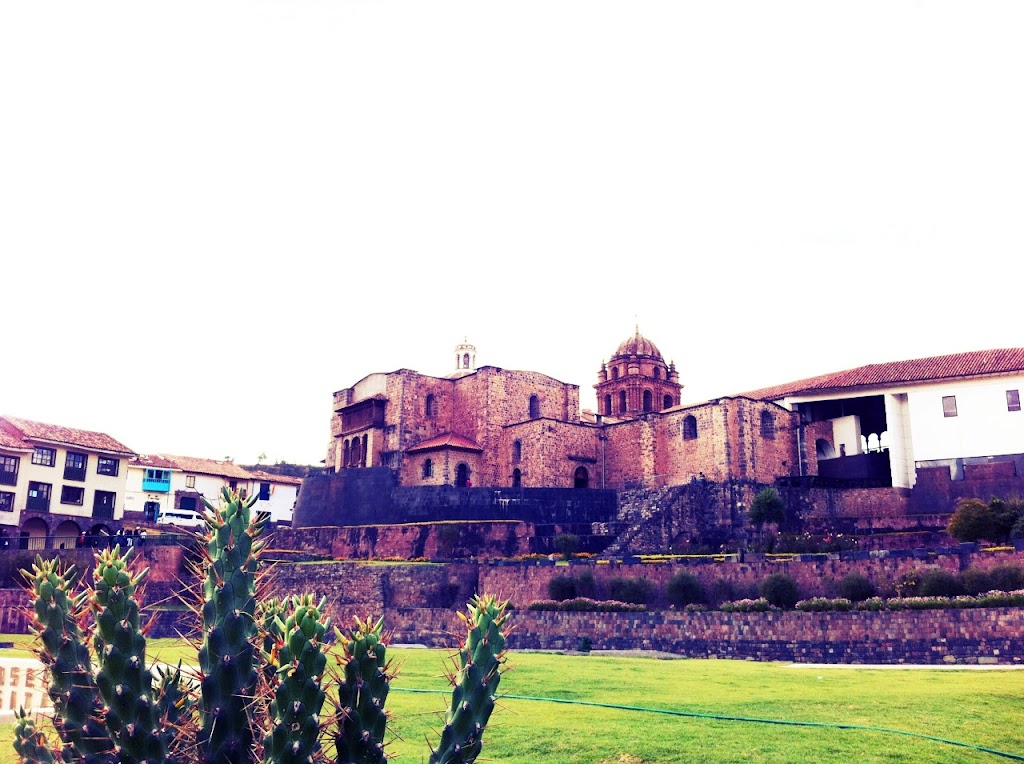 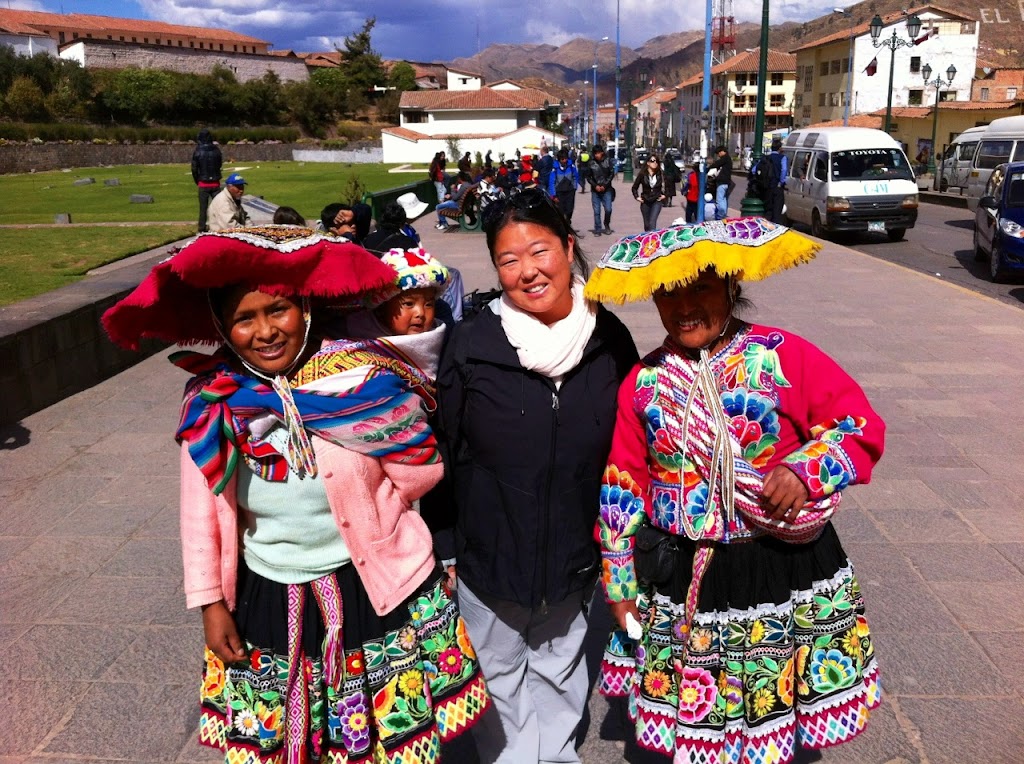 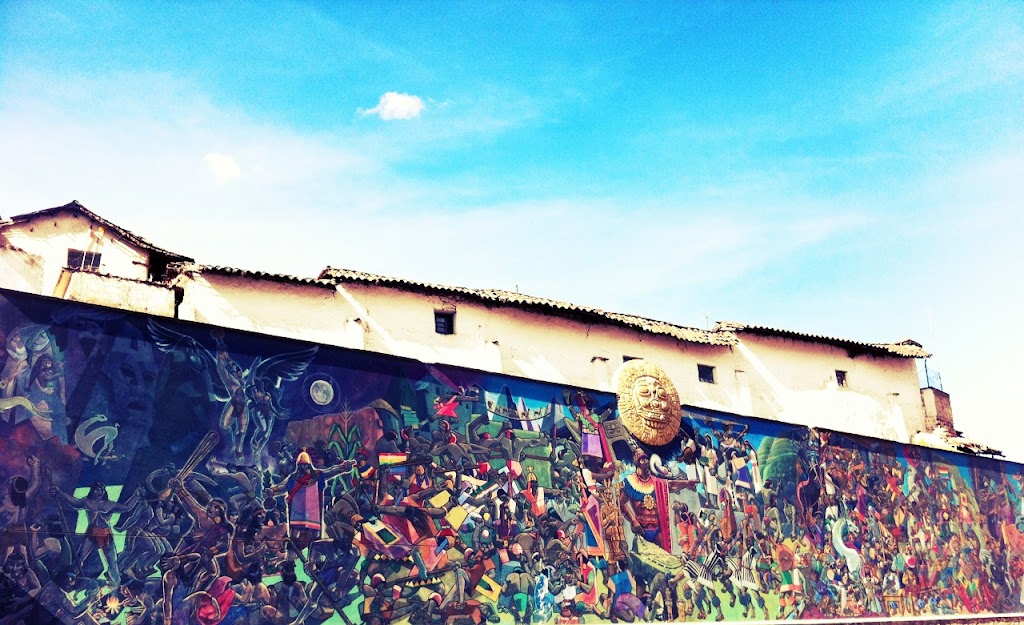 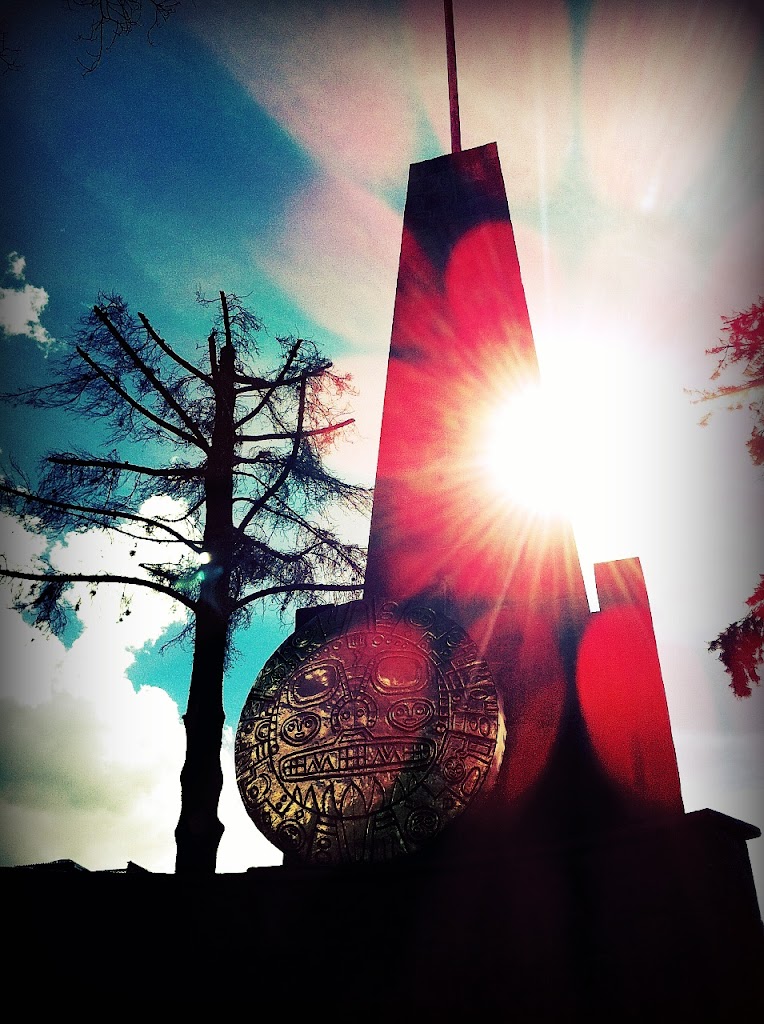 One place that we want to see before we leave Cuzco is the Incan fortress of Sacsayhuaman.  It's a short 30-45 minute walk from the center of town, but it's up a steep hill.  We've been trying to get over our altitude sickness so we haven't had the energy to make this trek on our first couple of days in Cuzco.  The altitude sickness feels like having the flu.  Mild headache, loss of appetite, insomnia, cold, and definitely shortness of breath on just a little bit of exertion.  We will be back in Cuzco after our trip to Machu Picchu, so hopefully, we will have something to report on Sacsayhuaman next week!