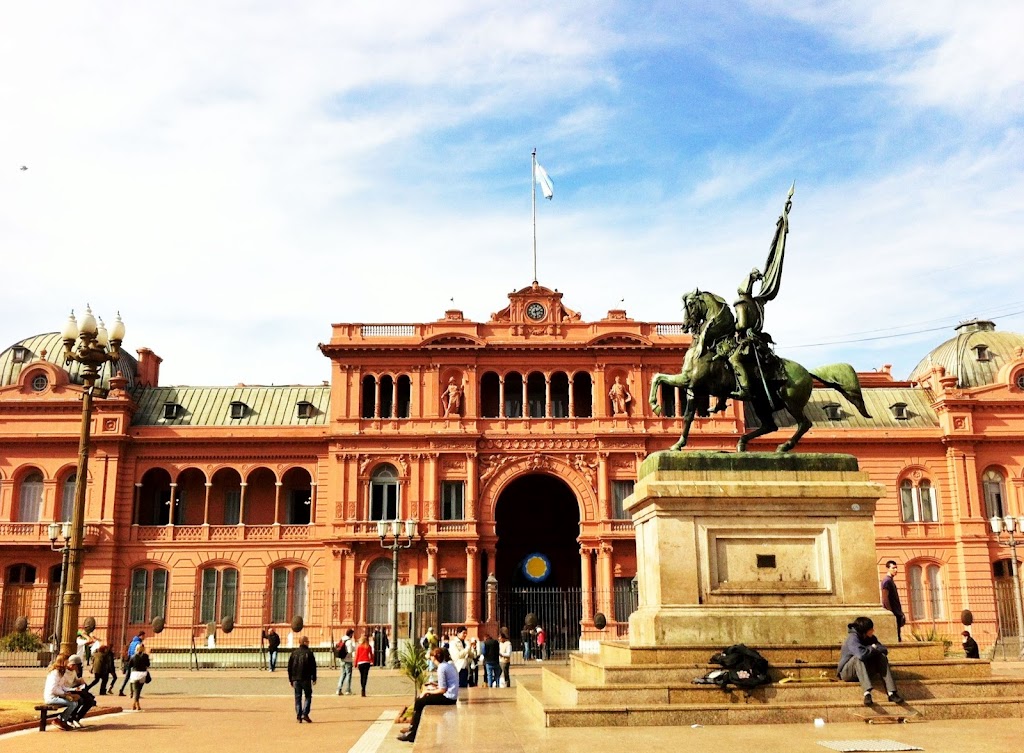 Plaza de Mayo and Avenida de Mayo is probably the FIRST place most tourists visit in Buenos Aires (BA), but alas, it's one of our last places on our list to sightsee.  We couldn't claim to have been in BA without having gone to the historic and political center of BA with the massive Obelisk tower that looks like the Washington Monument; or having a photo taken in front of the famous balcony of the pink Presidential Palace, Casa Rosada; or, visiting the oldest Cafe Tortoni on Avenida de Mayo; or the first subway line in South America; and finally finishing at the National Congress Building, home to the seat of the Argentine government.  We finally saw all that in the Monserrat District (also referred to as Microcentro and Congreso) on Saturday, Day 89 on our sabbatical around the world. 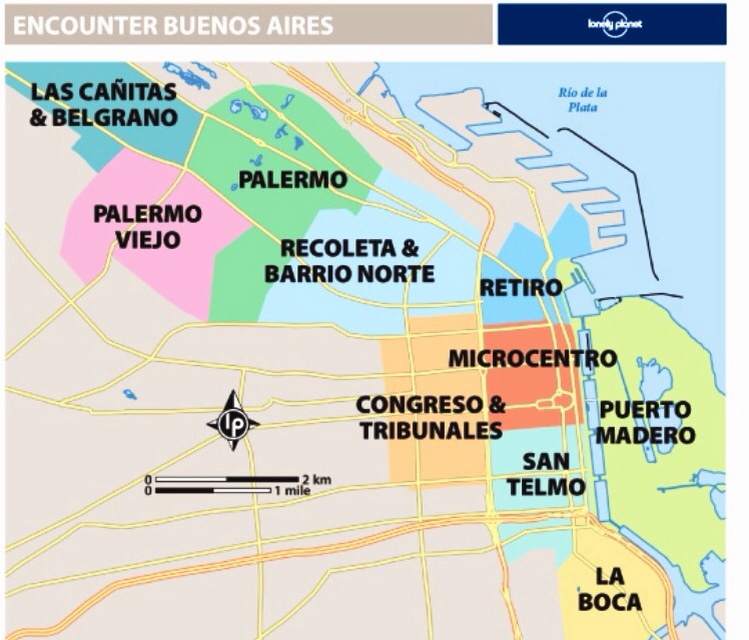 We could almost see and feel how the Argentines lived and did business along these avenues back in the 19th century.  The Parisian-style buildings, boulevards, plazas, and cafes are all integrated into the modern landscape.  Although Spanish settlers have been in this area since the 1500s, we were surprised to learn that Argentina didn't declare independence until 1810s; so much of the independence history and Argentine identity is as recent and evolving as the United States.  However, the comparisons stop there.  Argentina is nothing like the United States.  The longer we are here, the more differences - politically and culturally - we discover. 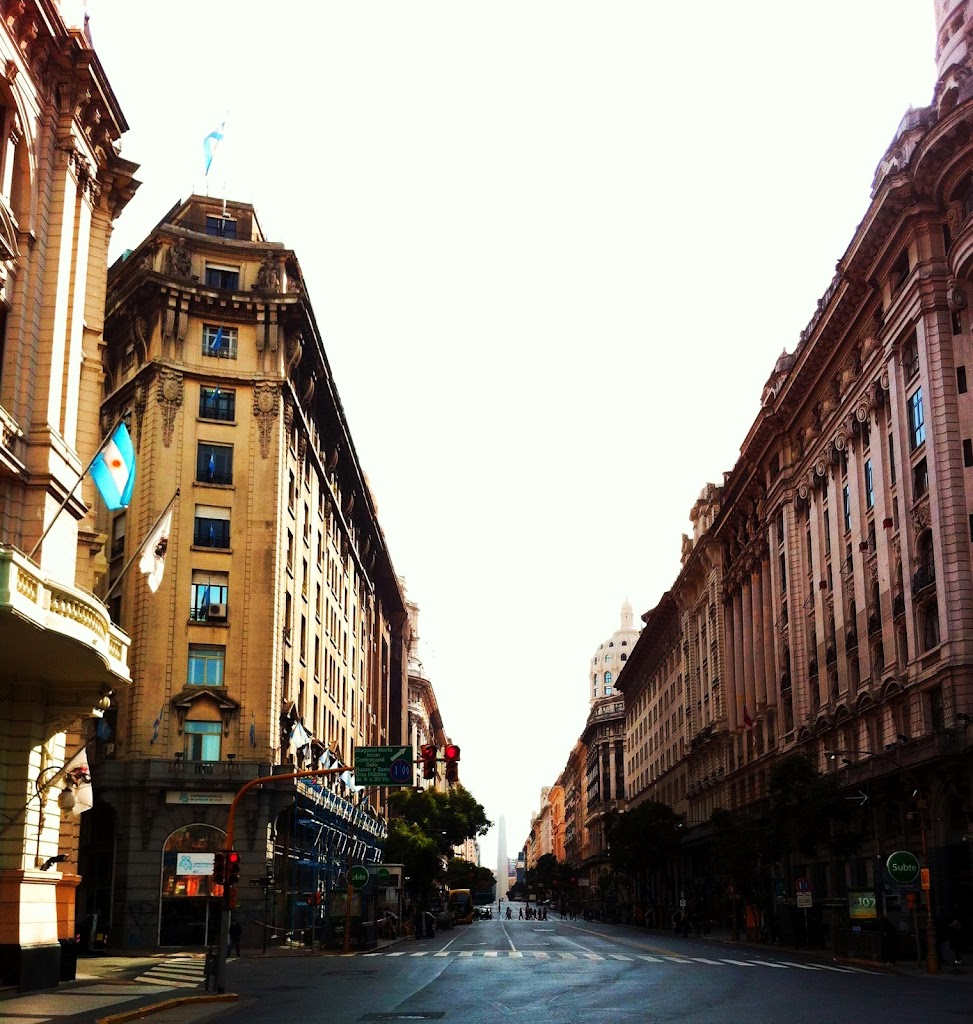 THINGS TO DO
We just started in Plaza de Mayo and walked west on Avenida de Mayo until we reached Congreso.  It's a short distance, but surrounding the plazas and along the avenue, there are numerous famous buildings and amazing architecture that keeps your eyes gazing upward the whole time (watch out for the dog poo!).  So, it can take a few hours to see everything.  On the BA walking tour, it lists no less than 31 landmarks along this path.  We quit taking pictures of over half of the them, and still felt quite overloaded with architecture and monuments by the end of the day.

HISTORY
"Monserrat is the most ancient district in Buenos Aires: it was here that the first Spanish settlers established in 1580. Plaza de Mayo, located at this neighborhood, was the earliest public square of the city, and site of many of the major events in the history of Argentina, such as the 1810 May Revolution, or the marches held by the Mothers of Plaza de Mayo during the 1976-1982 military dictatorship. The district took its name in 1769, after the establishment of the Parish of Nuestra Señora de Monserrat (Our Lady of Monserrat). Nowadays it encloses public buildings, banks, office buildings, museums and the seat of both the Argentine and the Buenos Aires Governments.

The first mayor of Buenos Aires, Torcuato de Alvear, wanted for the city a boulevard like those in Paris. Thus, in 1894 Avenida de Mayo was inaugurated, becoming the greatest urban renewal project at the time. This boulevard links Casa Rosada (the seat of the National Executive Branch) and the National Congress building, holding in between the legendary Plaza de Mayo, a setting for farreaching political events in the history of Argentina. Avenida de Mayo, with its cafés, billard bars and restaurants, best reflects the influence of Spanish immigration on the Porteño identity."  --Sitio oficial de turismo de la Ciudad de Buenos Aires, http://bue.gov.ar/

[Below: we first got off the subway at 9 de Julio station to get a close up view of the massive Obelisk tower, that can be seen from most major boulevard intersections.] 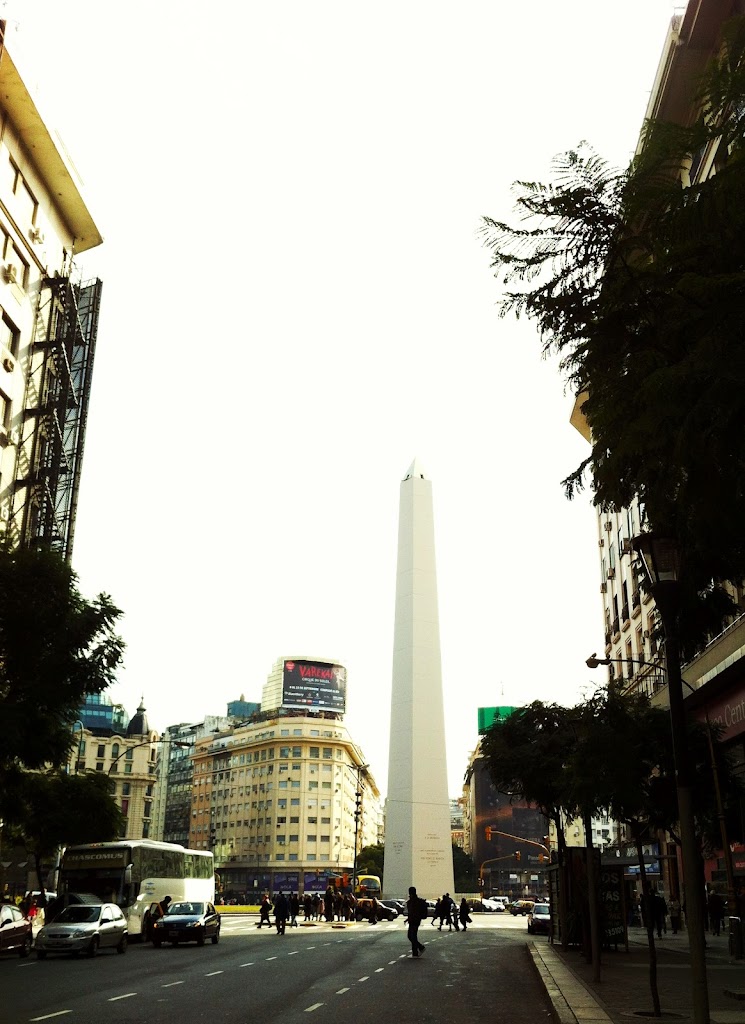 [Below: we then walked down the pedestrian mall, Calle Florida, to get to Plaza de Mayo.] 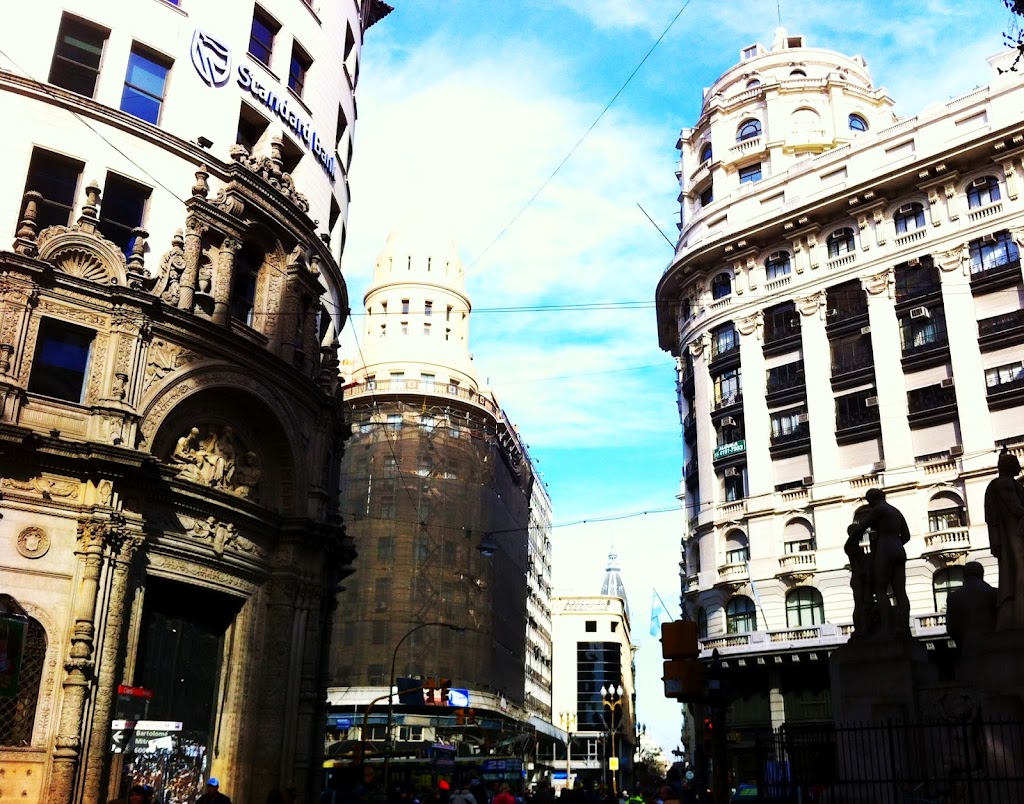 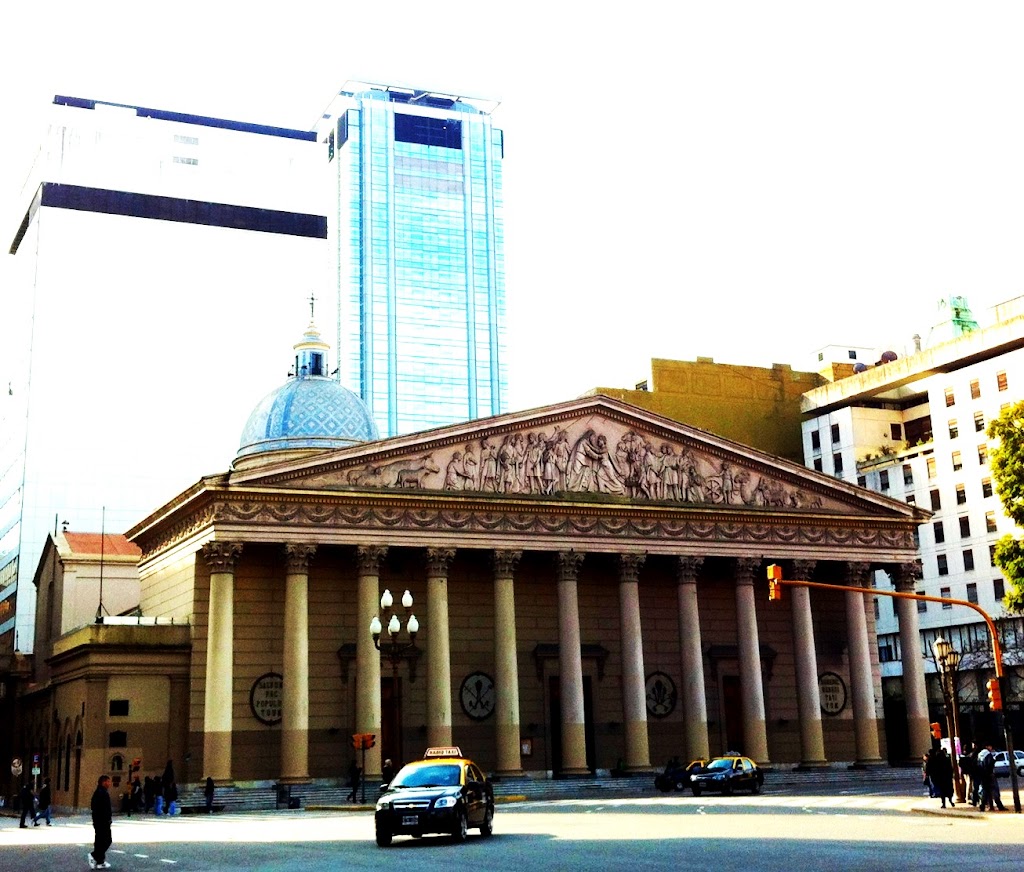 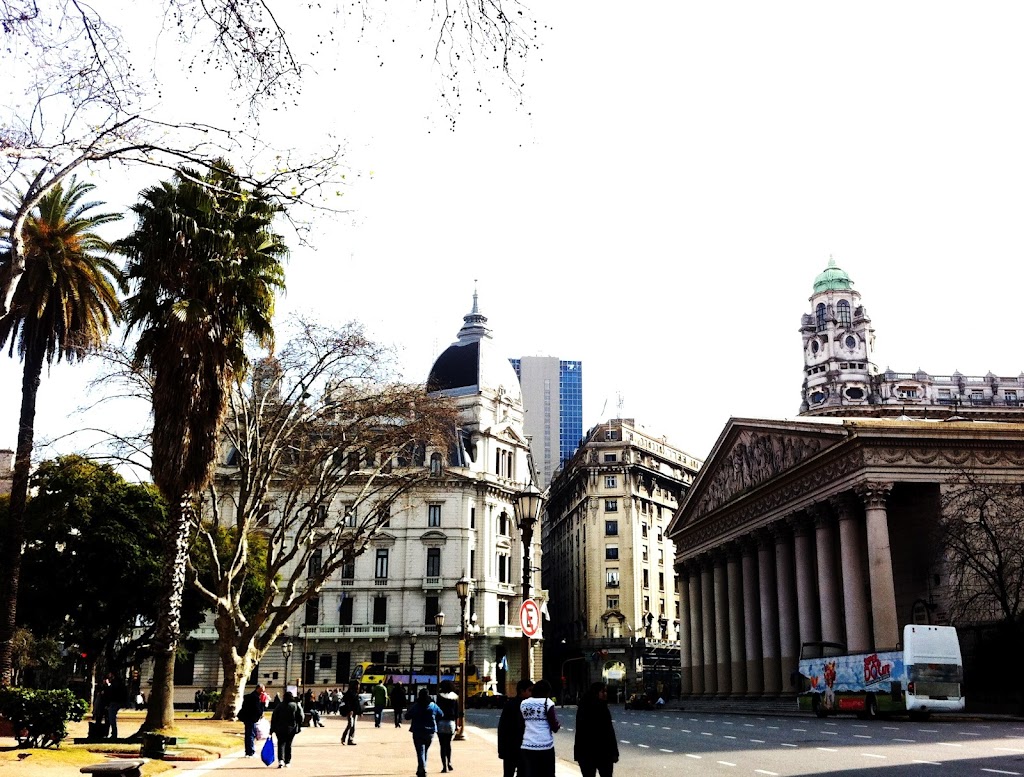 [Below: view of Plaza de Mayo with the Pirámide de Mayo in the middle and Casa Rosada on the eastern end.] 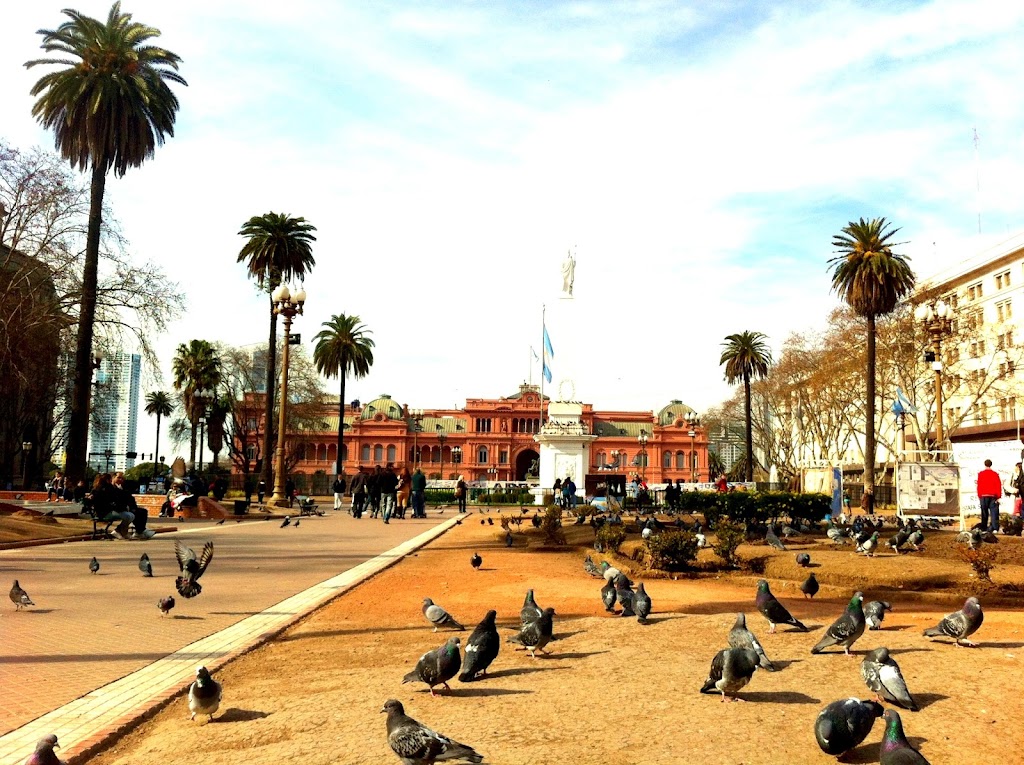 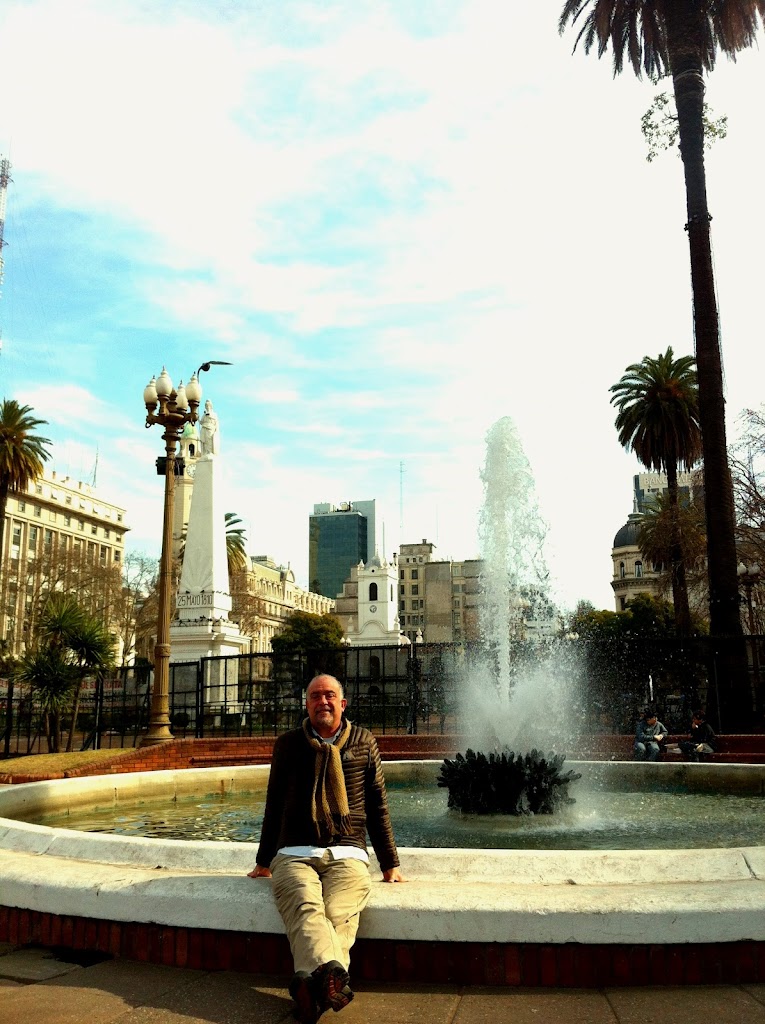 [Below: Pirámide de Mayo. Built in 1811 on the first anniversary of the May 25th, 1810 revolution where they removed the Spanish Viceroy and established their own government.] 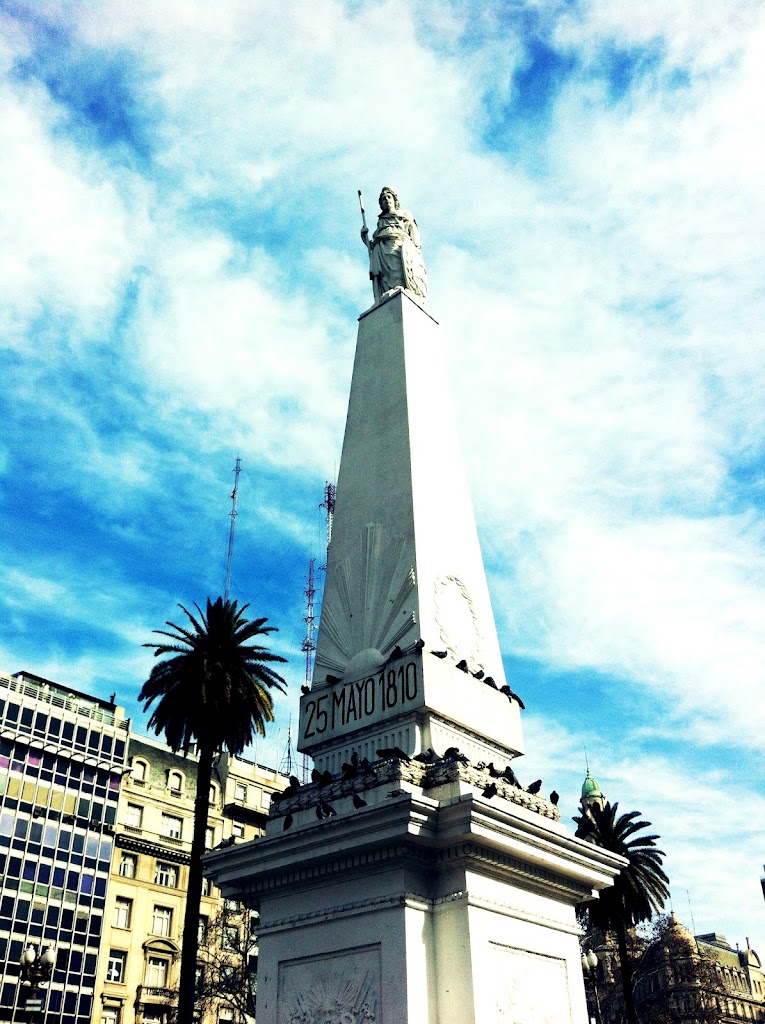 [Below: the famed Casa Rosada (Pink House) Presidential Palace where Evita addressed the crowd from the balcony.] 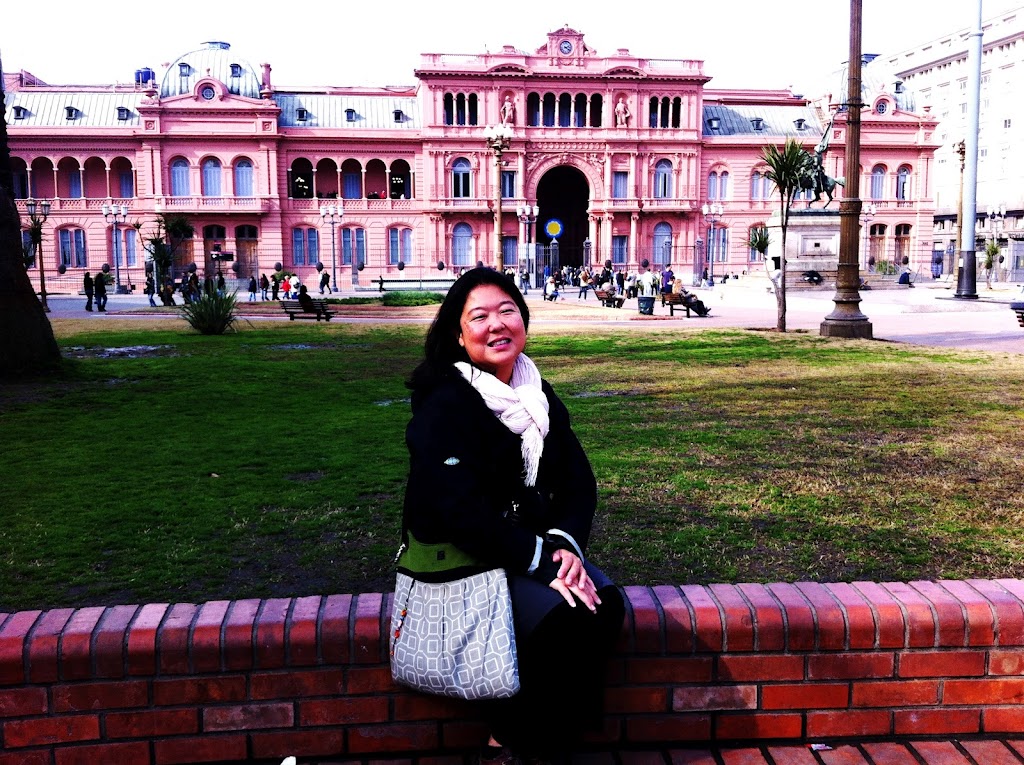 [Below: on the western end of Plaza de Mayo is the Cabildo, or Town Hall, and was the Spanish seat of government. Now, it houses the May Revolution History Museum.] 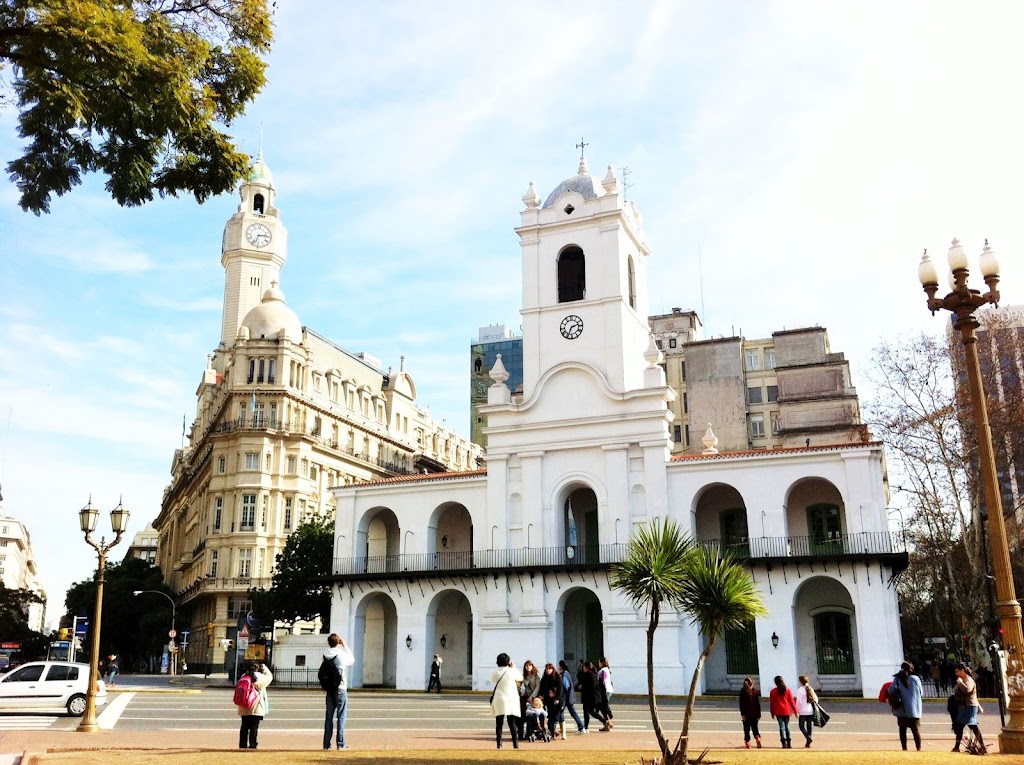 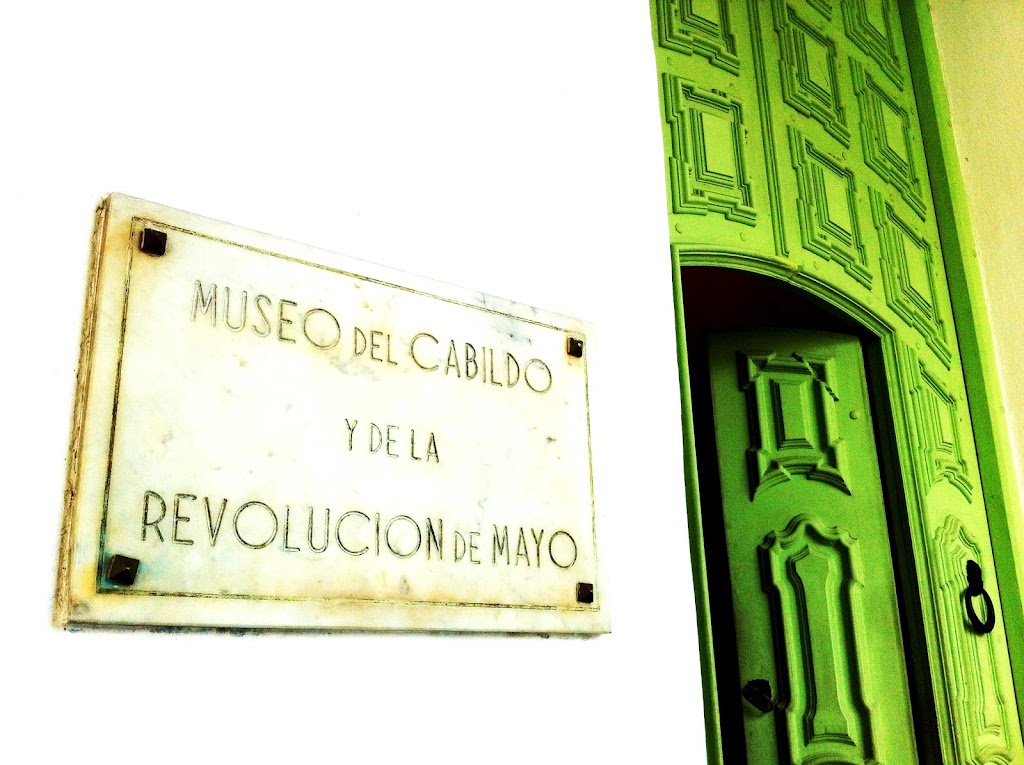 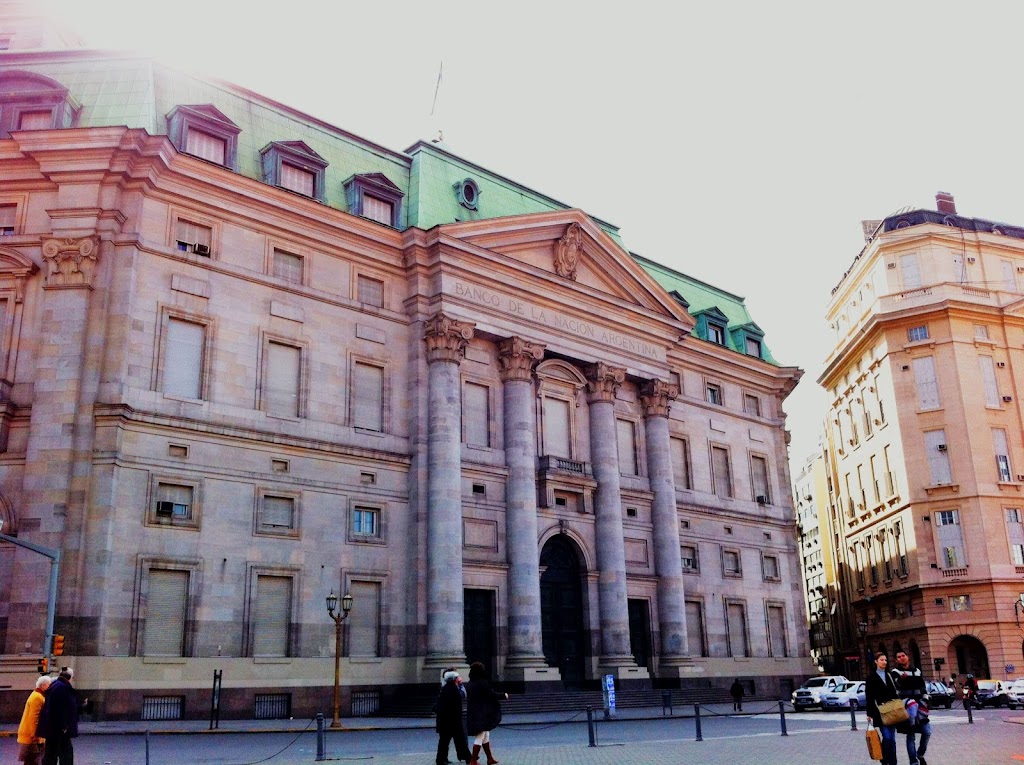 [Below: So, we're finally leaving Plaza de Mayo to walk down the Avenue! Here is a luxurious building built by a Parisian architect that served as the headquarters for the La Prensa newspaper until 1992. The building now houses the Buenos Aires Ministry of Culture.] 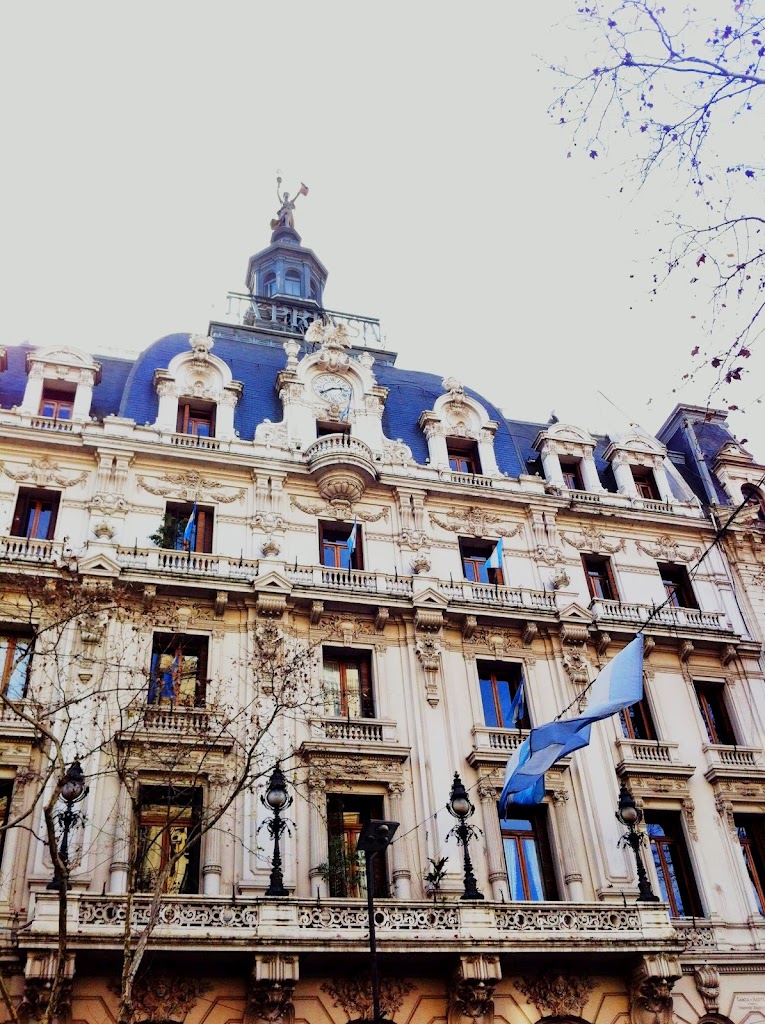 [Below: first subway line in South America, is now called Line A in Buenos Aires. Some of the original architecture and advertising remain.] 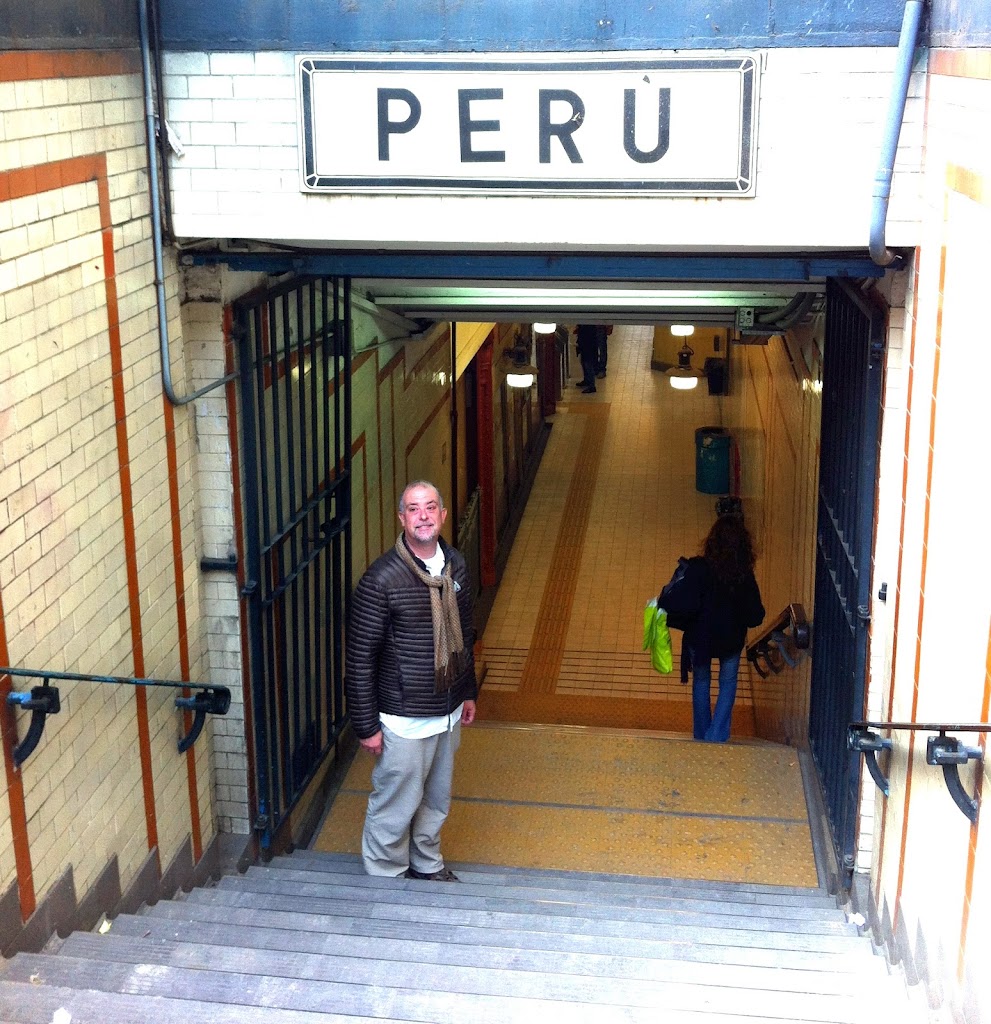 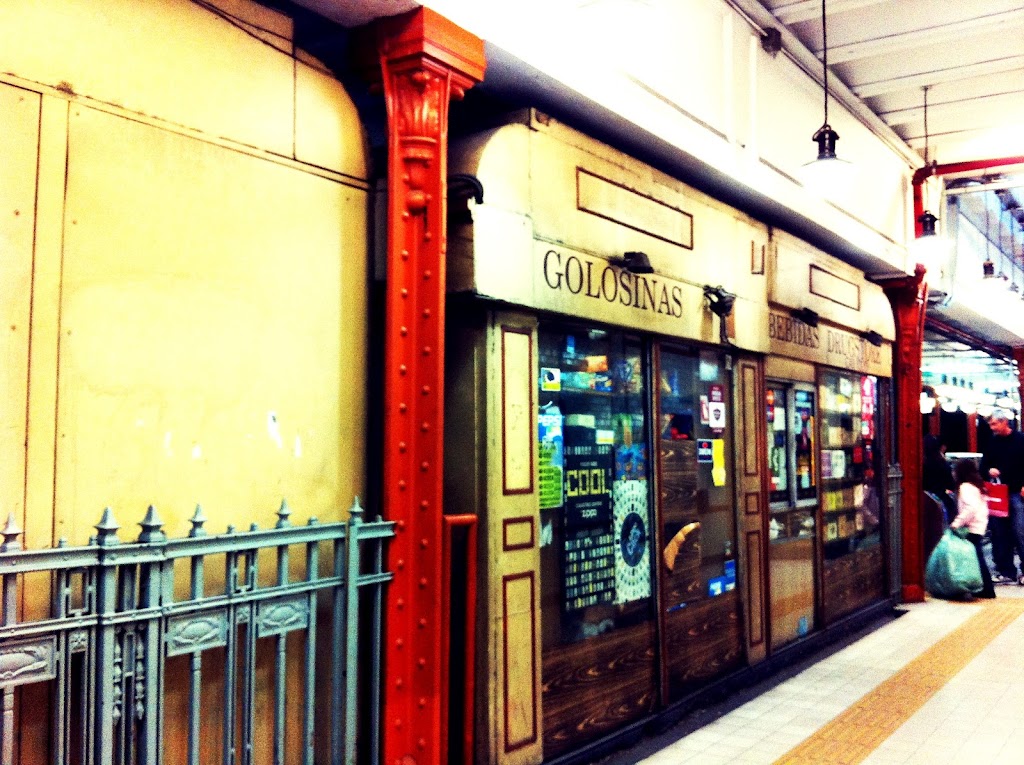 [Below: Oldest cafe in BA, Cafe Tortoni, since 1858, frequented by famous artists, writers, and politicians. Upstairs is the Argentine Tango Academy.] 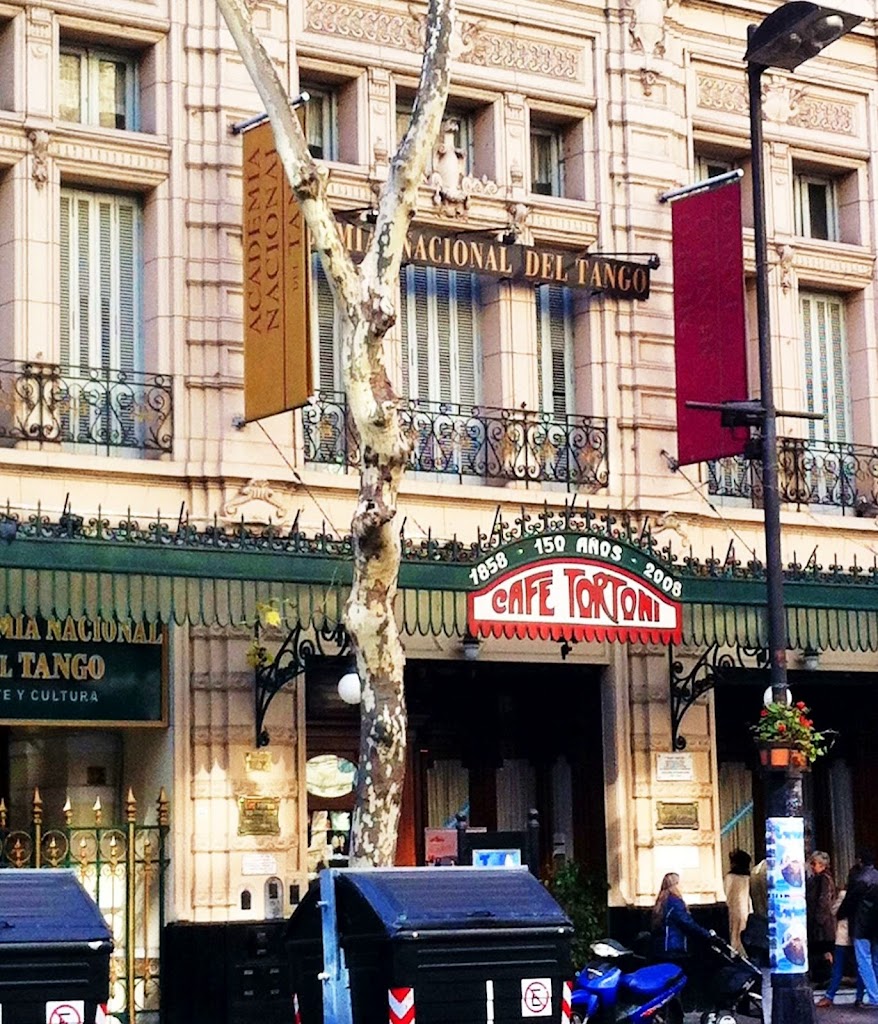 [Below: Not a landmark on the published walking tour, but find the juxtaposition of old French architecture marred by graffiti and murals to be contradictory. We would consider this a mural instead of just random graffiti.] 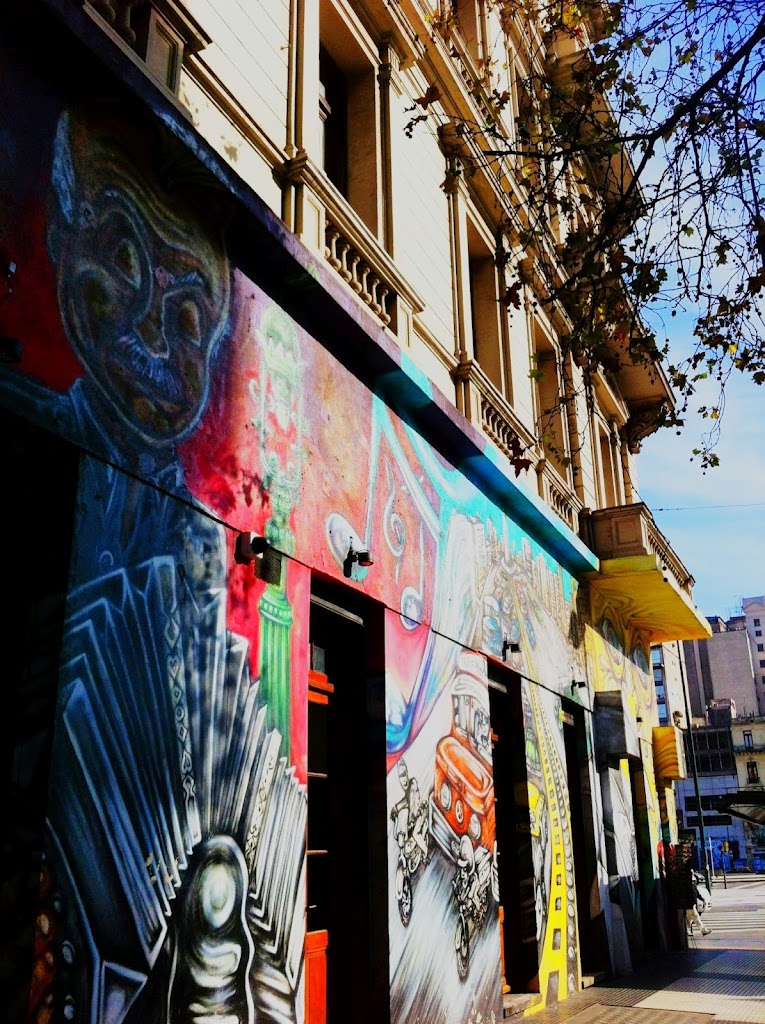 [Below: crossing Avenida 9 de Julio again! Still 20+ lanes wide! Thank goodness for the big median in the middle so we don't have to sprint across. A large Eva Peron mural on a public works building.] 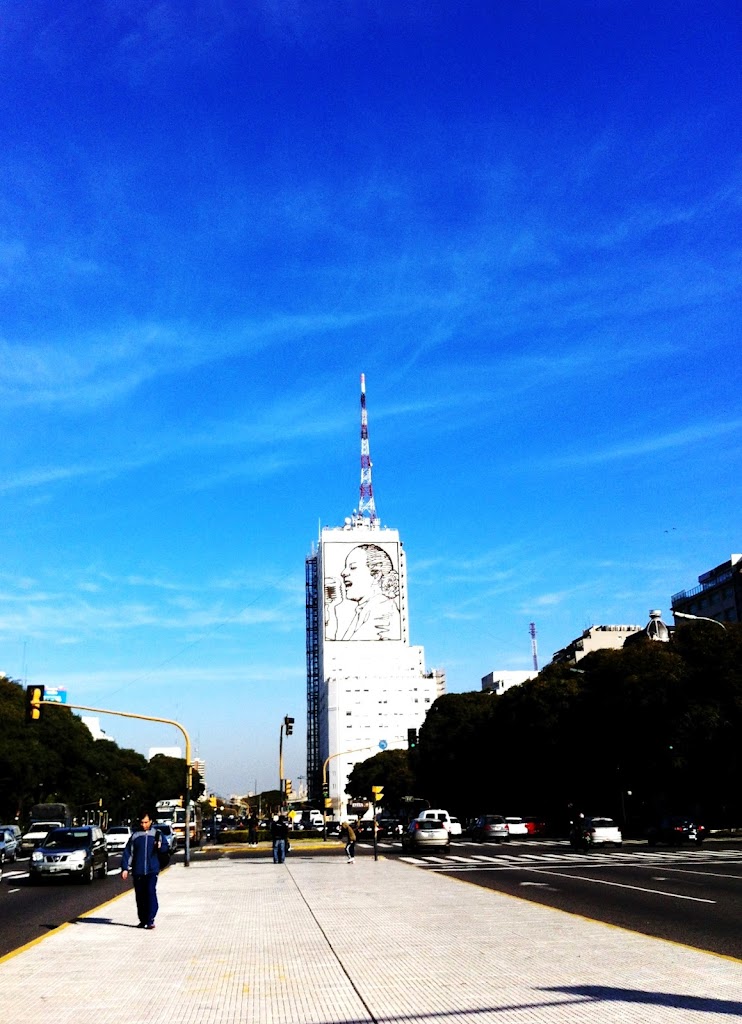 [Below: another famous meeting spot. One of the most traditional porteños bars since 1894, 36 Billares.] 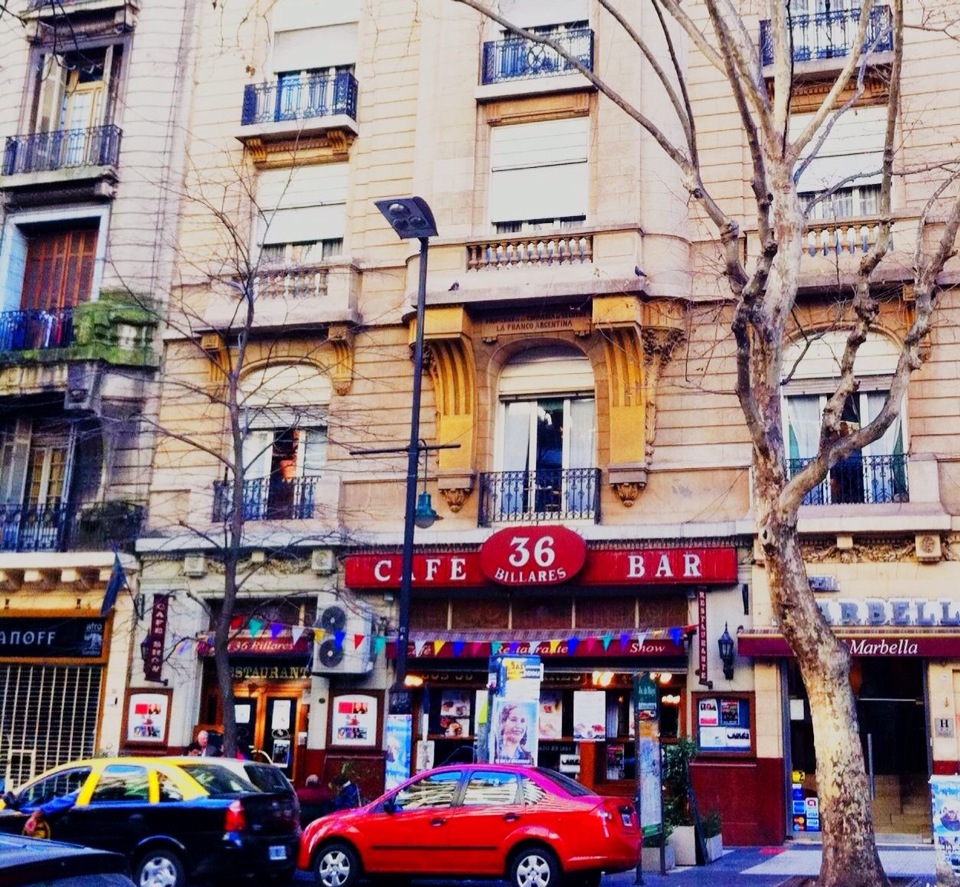 [Below: ...and we finally made it to Congreso Plaza. The seat of the Argentine government. One of 3 replicas of The Thinker - original casting and signage by the French sculptor, Rodin.] 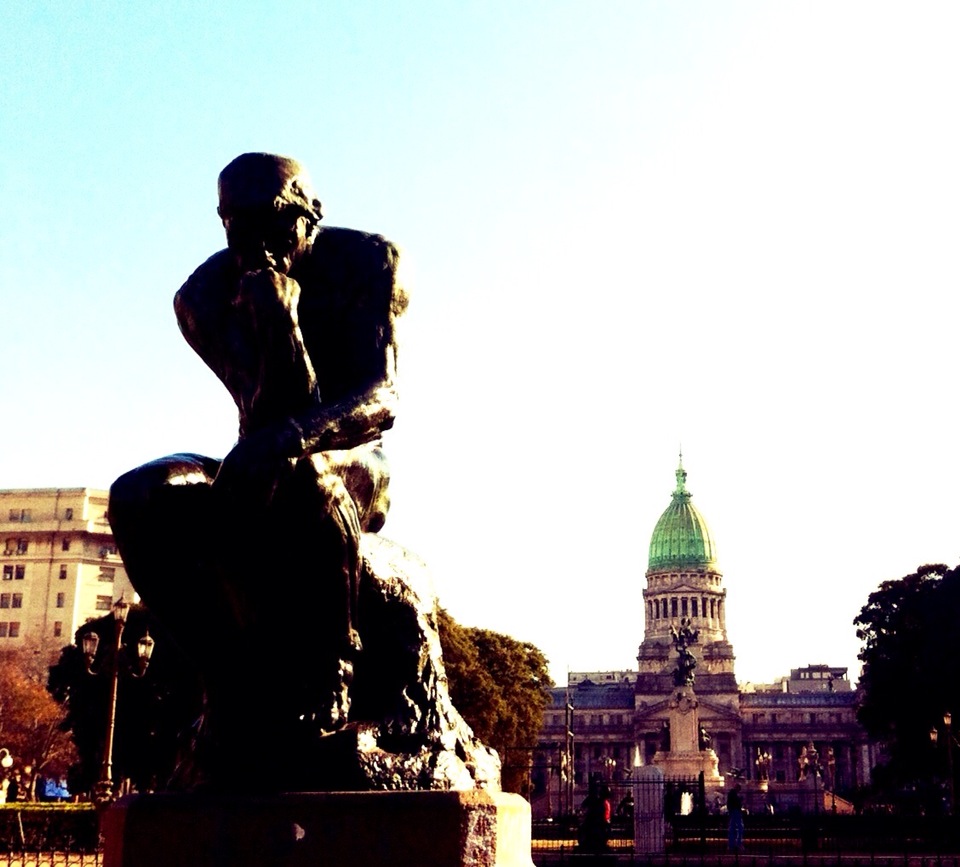 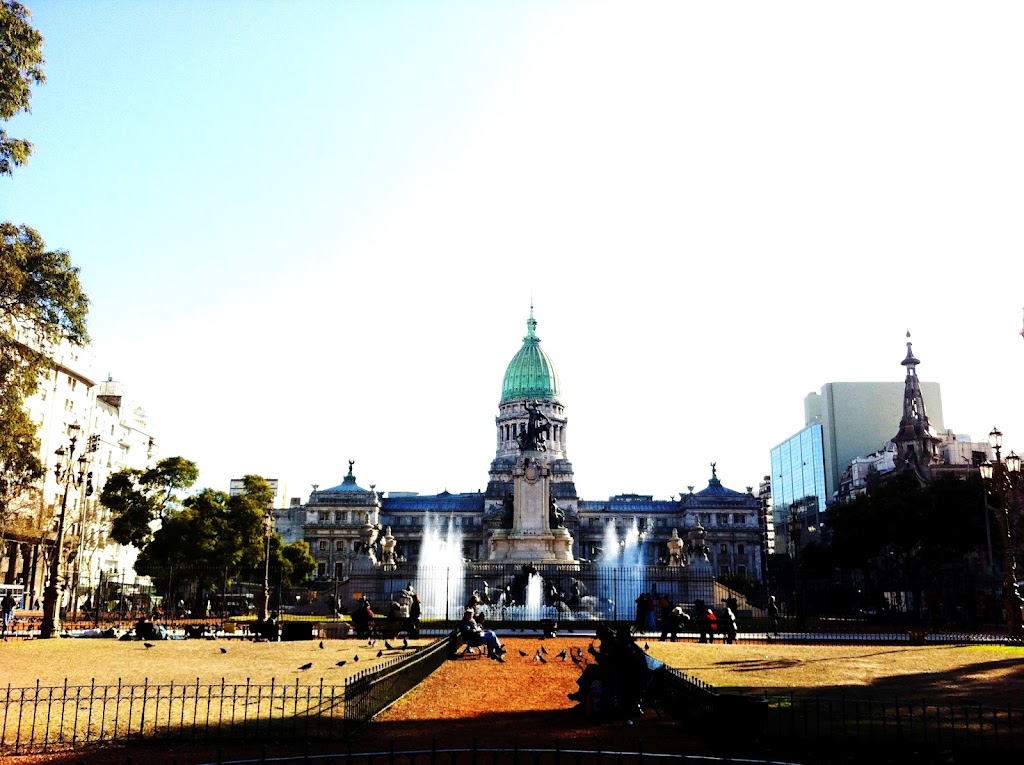 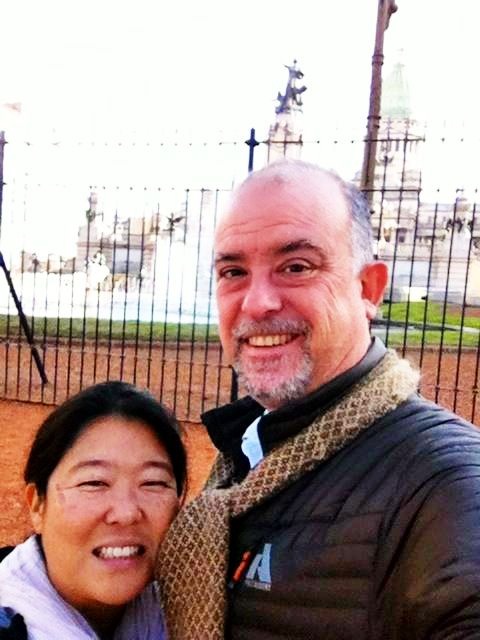 [Below: Monument to the Two Congresses. It was named in honor of the Constitutional Assembly of 1813, the first local attempt to create national law, and the Congress of Tucumán of 1816, which declared Independence from the Spanish Empire, and many locals refer to the plaza by that name.] 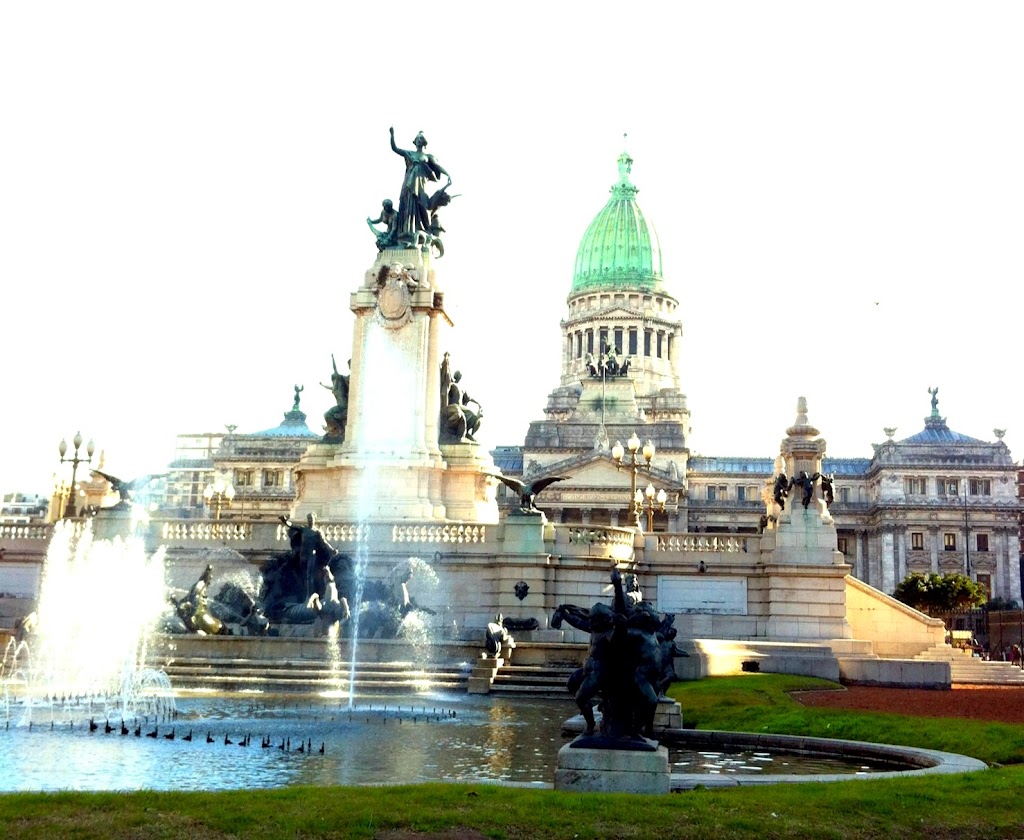 [Below: Boarded up remnants of what used to look like an amazing confiteria (snack shop, bar, cafe, salon, meeting place) called Confiteria del Molino, closed in 1997 for financial reasons.] 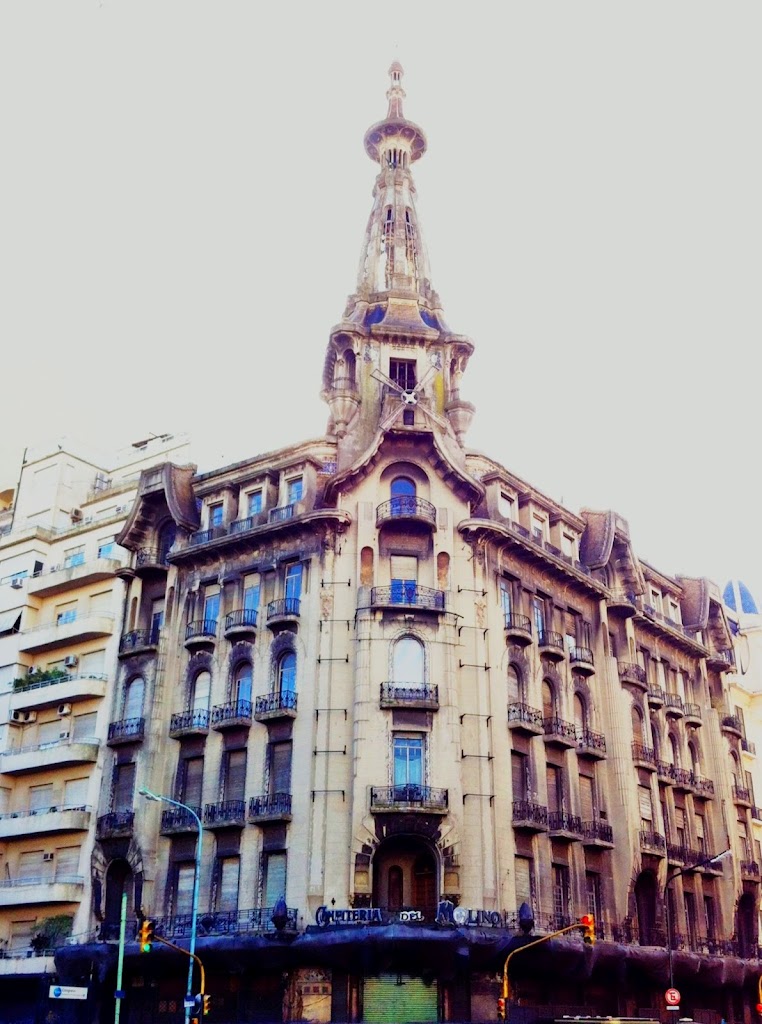 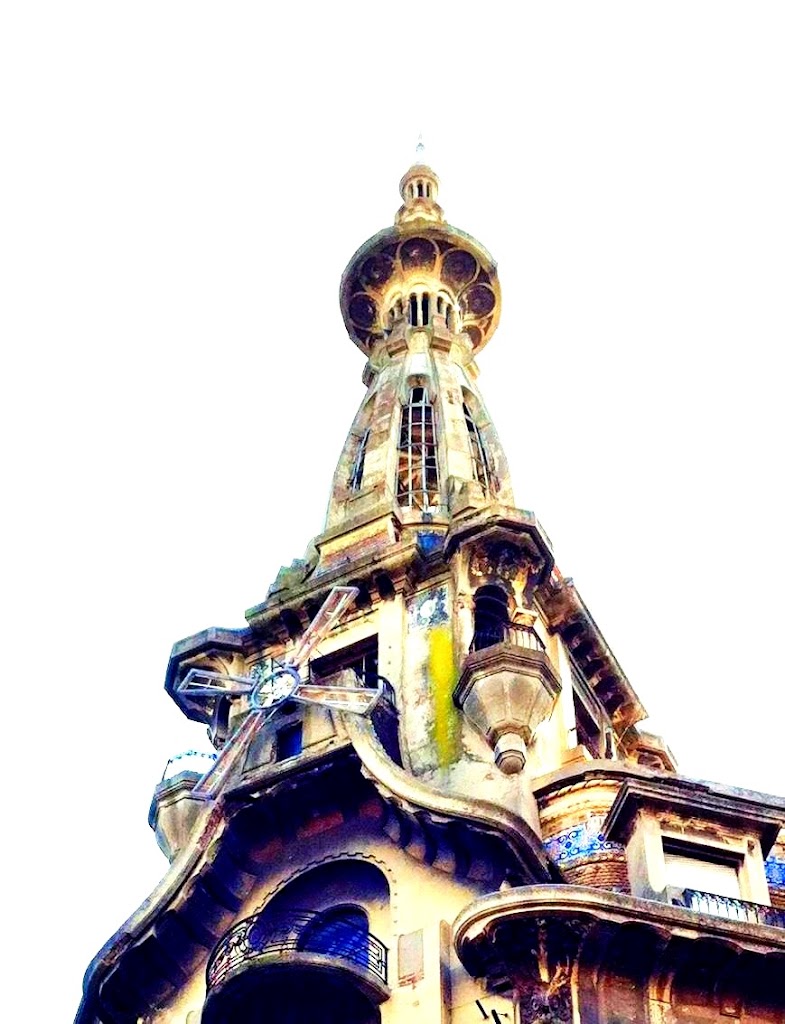 See? Told ya there was a lot to see. That's Plaza and Avenida de Mayo, folks.