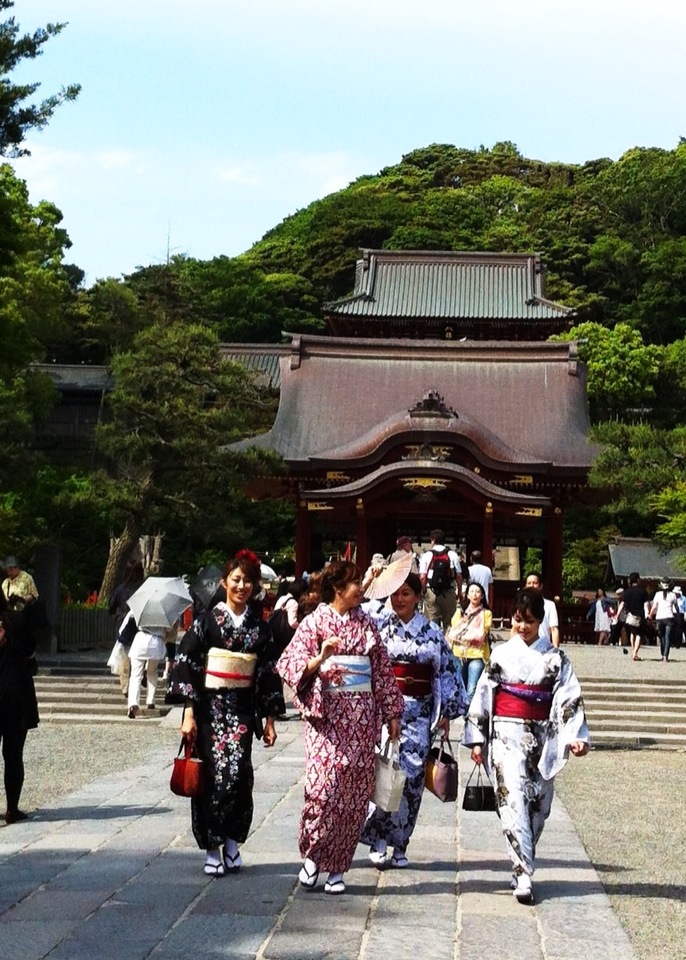 Kamakura's (鎌倉) close proximity to Tokyo and its historical significance to Japan make this place a popular day visit. Kamakura is located approximately 30 miles southwest from Tokyo on a peninsula, surrounded by mountains on 3 sides and the Sagami Bay on the other - making Kamakura a naturally fortressed city. Now days, there are multiple ways to get there by train. It takes a little more than an hour from Tokyo. The running joke so far has been that no matter where we are going, 'it takes about an hour' to get there. We were blessed to have a personal tour guide, Kaori Takeuchi-san, a personal friend of my parents! 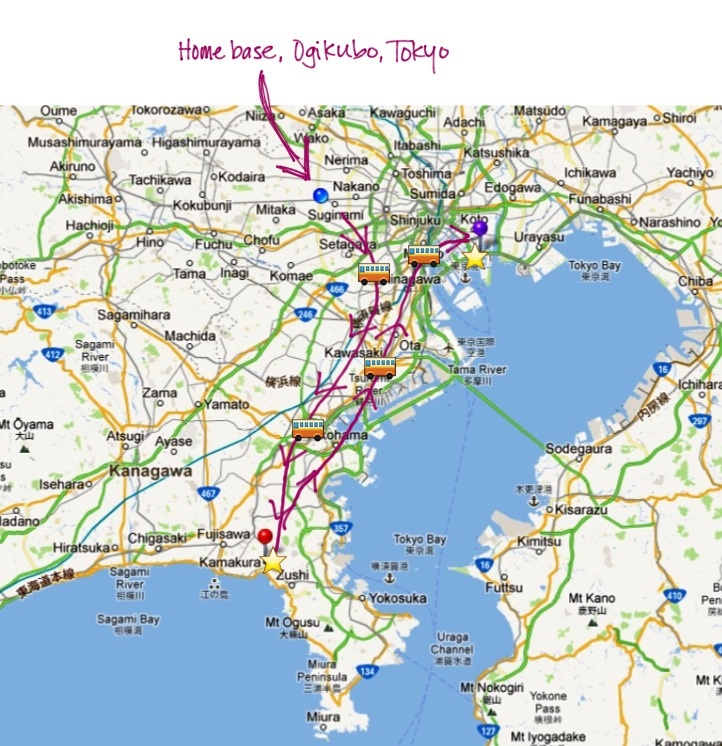 The significance of Kamakura is this. In the 1100s AD, the political center, capital, was in Kyoto. Minamoto no Yoritomo, a shogun of the Minamoto samurai clan, was a fugitive running away from the Taira samurai clan that assassinated much of his family already. However, Yoritomo was able to defeat the powerful Taira samurai clan, thus becoming the founder of the Kamakura shogunate and bringing in the Kamakura Period that lasted 141 years. Kamakura became the political center and Yoritomo, the de facto ruler of Japan, despite the official capital being in Kyoto. As a result, Kamakura enjoyed a certain autonomy from Kyoto, and actually surpassed the capital, politically, culturally, and economically. However, the Kamakura Period came to an end when Imperial loyalists successfully attacked the city in 1333. The downfall of Kamakura led to a more chaotic and violent period in Japan called the Muromachi Period. 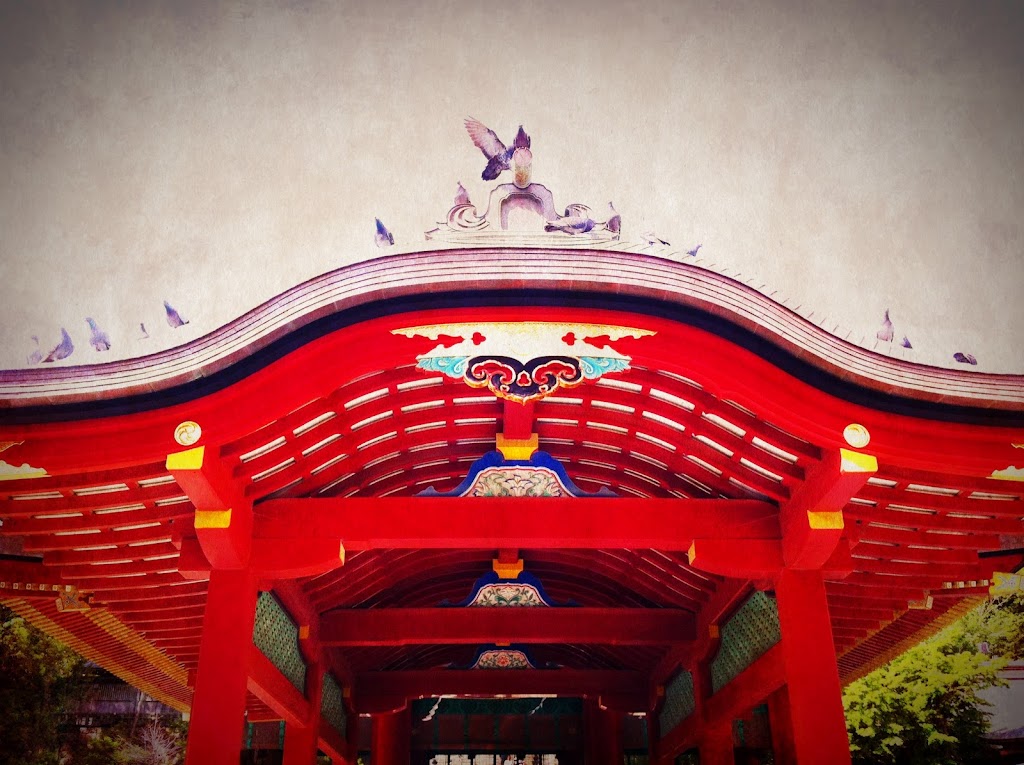 Tsurugaoka Hachiman-gū (鶴岡八幡宮) is the most important Shinto shrine in Kamakura. The shrine is dedicated to the the god of warriors - Hachiman. The shrine was originally built in 1063, but Minamoto no Yoritomo moved it to its present location in 1191 after establishing Kamakura to protect him and his de facto government. There are several sub-shrines that make up Tsurugaoka Hachiman-gū. The lower one is called Wakamiya Shrine, while climbing 61 steps up leads us to the Hongū Shrine. Sadly, there was a 1000 year old gingko tree by the stairway that fell on March 10, 2010 after being uprooted by a storm. Both the tree stump and a section of its trunk have been replanted nearby. 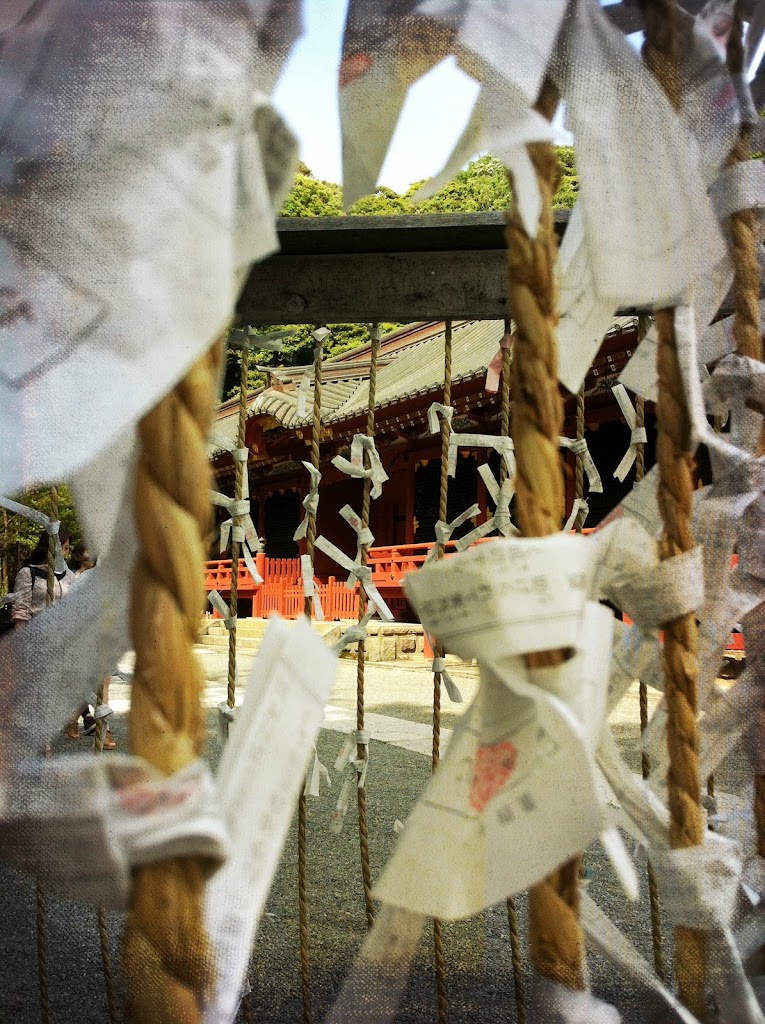 A custom at Japanese shrines and temples is to pay a small offering in exchange for a random fortune called Omikuji. The fortune includes blessings and predictions on general matters such as finding a good romantic match, or of health, fortune, life, etc. If the prediction is bad, it is a custom to fold the paper and tie it to a pine tree or wire fence provided at the shrine/temple, hoping that the bad luck will stay with the tree rather than attach itself to the person. 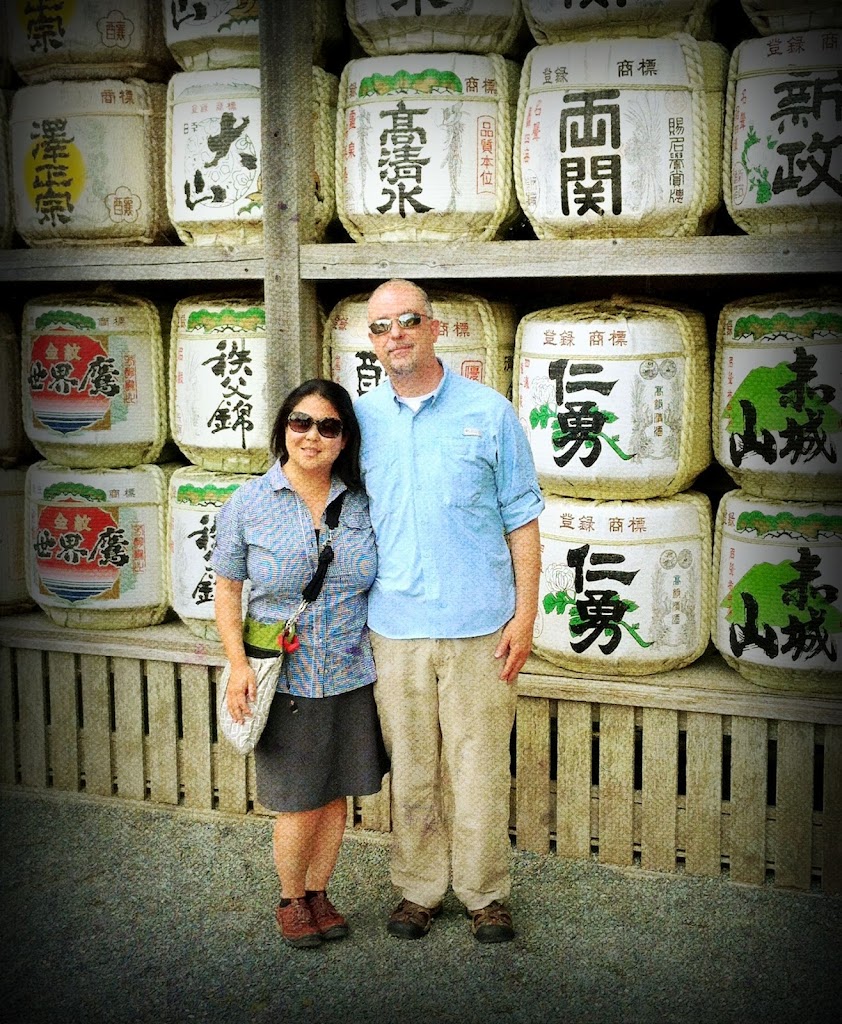 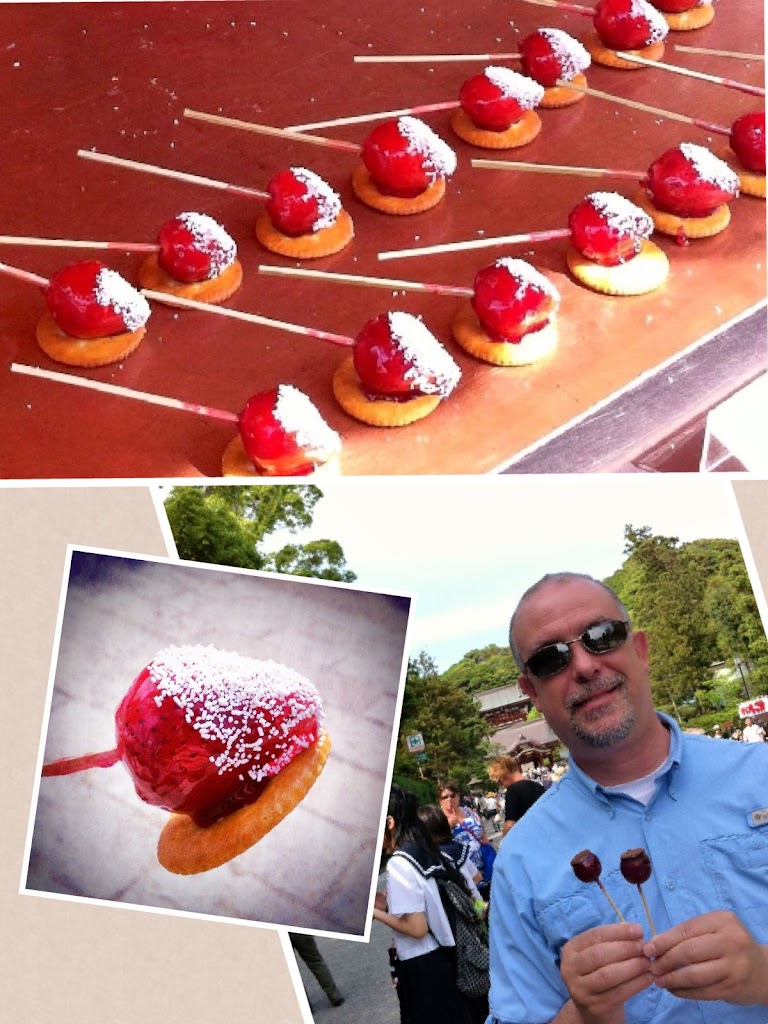 A lovely tree-lined boulevard with lots of shops extends from the shrine all the way to the ocean. It is called Ōji Avenue, Kamakura's main street. We found a small noodle shop to have lunch in, and later, a tea shop for some traditional Japanese dessert called anmitsu. Many dishes in Japan contain rice and/or beans, including this dessert. Anmitsu contains cubes of translucent jelly made from algae or seaweed, a heap of sweet red bean paste (anko), some fruit, occasionally glutinous rice balls (shiratama dango), and sugar syrup (mitsu). We had cream anmitsu, which comes with ice cream! 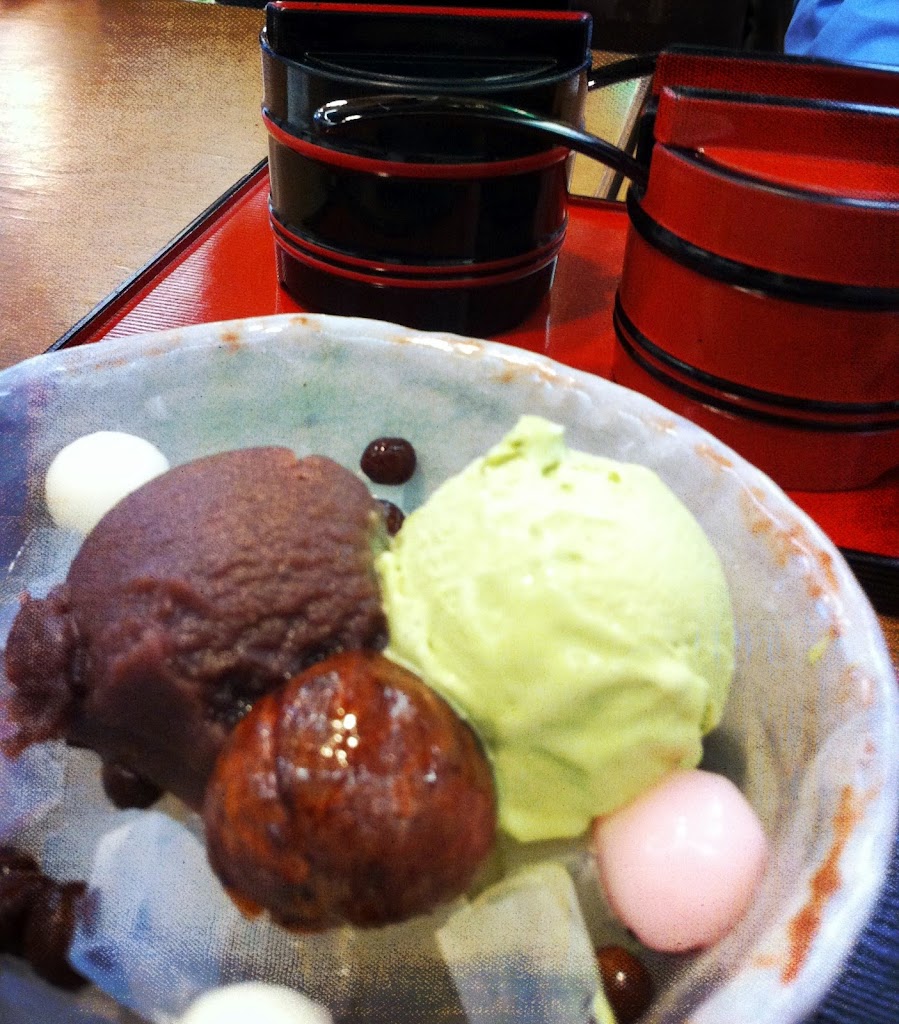 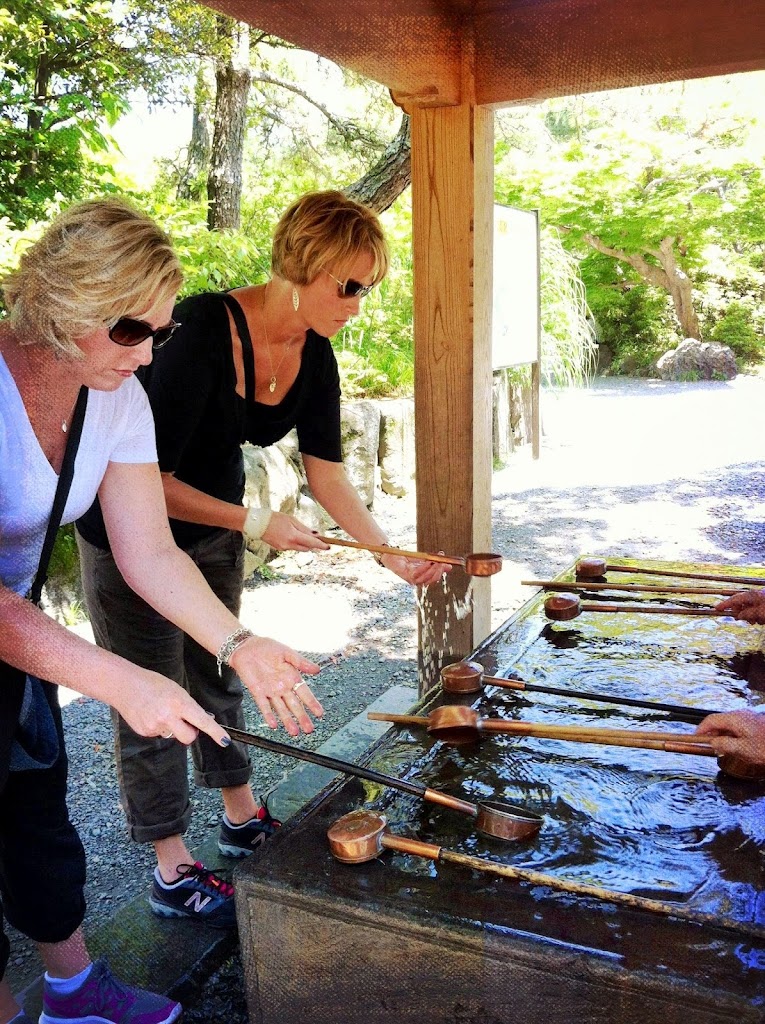 On the other side of Kamakura is the Kōtoku-in (高徳院), a Buddhist temple of the Jōdo-shū sect in the city of Kamakura. The temple is renowned for its "Great Buddha" (大仏 Daibutsu), a monumental outdoor bronze statue of Amida Buddha which is one of the most famous icons of Japan. This bronze statue, that used to be covered in gold leaf overlay, was cast in 1252 AD, but was preceded by a giant wooden Buddha that was destroyed by a storm. The bronze Buddha has been in the open since September 20th, 1498, when a tsunami washed away the building that housed the Buddha. It stands almost 44 feet tall and weighs 121 tons (270,000 pounds). 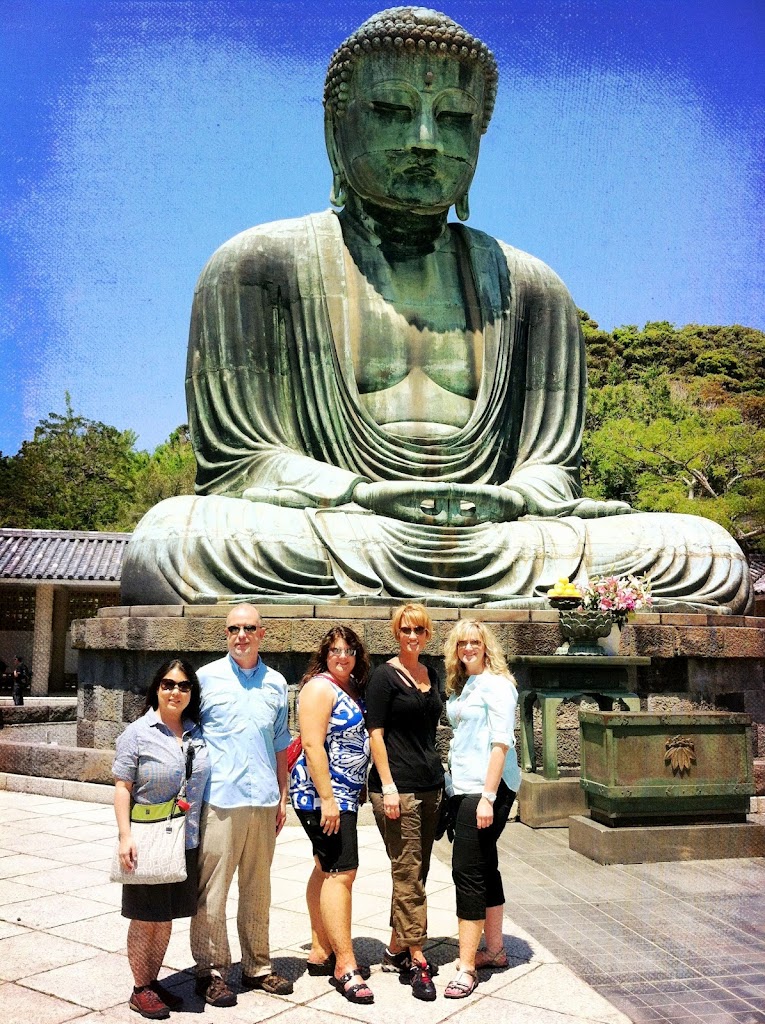 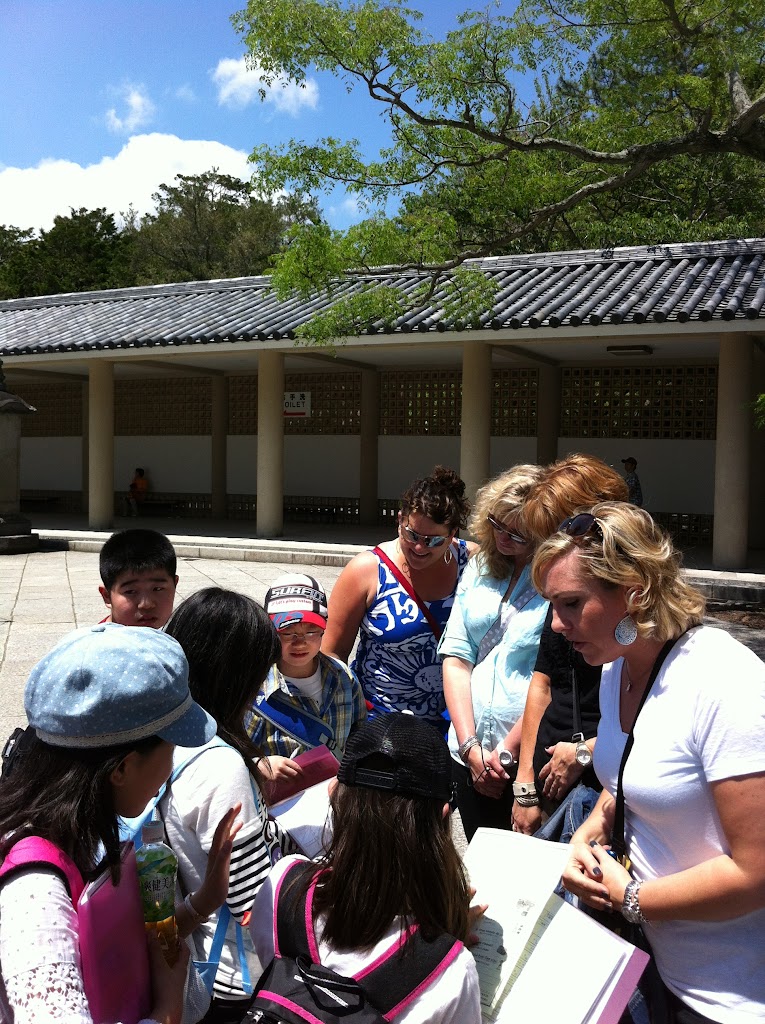 We were amongst many school children on their field trip. One such group approached Lisa, Amy, Rachel, and Kris as an assignment for their English class. They had a list of questions they had to ask in English, understand the responses in English, then the girls had to provide their signatures and get a photo together. Some of the questions were, "What is your name?", "Where are you from?", "Do you like Kamakura?", "What is your favorite temple?"

After a day in Kamakura, we headed back towards Tokyo Bay for our Yakatabune (traditional Japanese boat) dinner cruise, and yes, that train ride took about an hour. :) 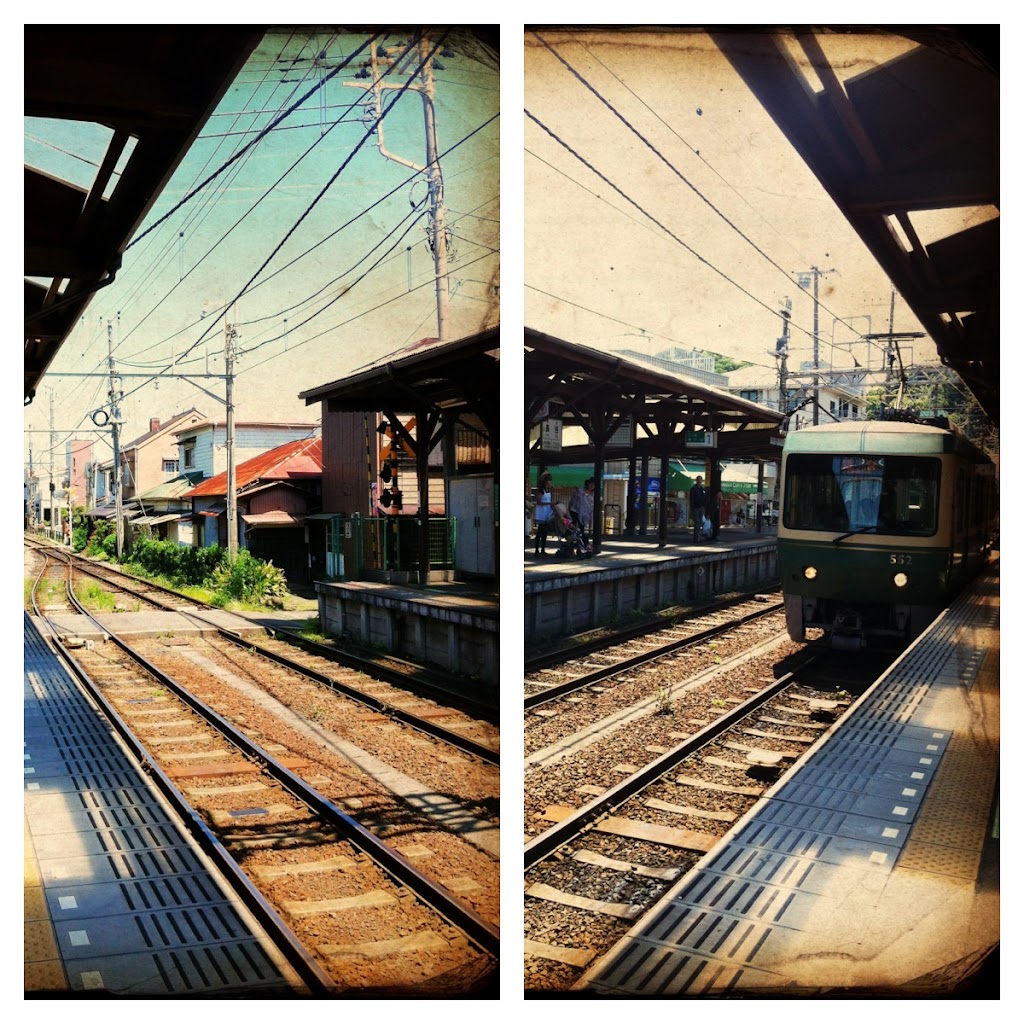